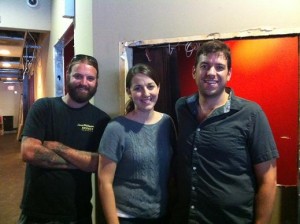 A veteran of the Richmond restaurant scene and her husband are launching a new restaurant this month in the West End near University of Richmond.

Jessica and Josh Bufford bought City Limit in the Village Shopping Center off Three Chopt Road in June and shut it down this weekend. They plan to reopen Aug. 18 as Toast.

They purchased City Limit from Andy Rothenberg who opened it in 2006 with a group of partners. They would not disclose how much they paid for City Limit. The Buffords will lease the space in the shopping center run by Regency Centers.

Jessica Fulbright Bufford, a graduate of the University of North Carolina at Wilmington, moved to Richmond and started her career at Stella’s, owned by Johnny Giavos, in June 2005. She has also worked at Kitchen 64, Three Monkeys and Gibson’s Grill — all owned by Giavos.

Bufford developed the concept for Toast while working for Giavos and his wife, Katrina. When the couple was opening Gibson’s Grill in 2009, Bufford got to see firsthand what it took to launch a restaurant: from picking out the upholstery and silverware to developing the menu.

Several trips to Washington and the West Coast with her then-boyfriend Josh, who works in IT, inspired her to think about her concept, and planning their wedding last year motivated Bufford to go for it.

“After having so much to do with planning the wedding — when it was all over, I got a little depressed, like, ‘now what am I going to do?’ So I thought, ‘why not open a restaurant?’” she said.

The Buffords put the word out that they were in the market to buy a restaurant. Curbside and Conch Republic owner Bob Cox, who had been a founding partner in City Limit, put them in touch with his former partners in May, and by the end of June the Buffords were the proud new owners of the West End neighborhood bar.

The couple spent the past month getting to know their customers and the 13 employees they inherited.

“It’s been really cool to come in and spend these past four and a half weeks with the staff and the regulars, talking with them about what we want to do,” Jessica Bufford said. “The neighborhood seems really excited.”

The couple plan to hire about 10 more for the wait staff.

Toast chef Ian Kinker, formerly of Gibson’s Grill, is going to serve some old favorites with flair. For example, Bufford said, the meatloaf would be made with turkey and beef, wrapped in bacon and topped with made-from-scratch ketchup. The sloppy joe will be made with ground lamb and chorizo, mixed with Moroccan spices and topped with garam masala aioli and grilled fennel.

They hope to have local brews on tap, including Hardywood and some Nelson County, Va., beers such as Devil’s Backbone, Wild Wolf and Blue Mountain. The restaurant will seat about 130.

Josh Bufford said he and his wife wouldn’t be strangers at Toast.

“What I think is most important for us is that Jess and I are here, and we’re going to be here most of the time, because this is our place,” he said. “It’s hard to find a restaurant that sucks where the owners are there all the time.”

Nothing but the best of luck to you all. I’ts wonderful to see a restaurant open with some style and a true reflection of what Richmond has to offer. Knock ’em dead.

Wow! Congratulations guys. looking forward to seeing what Toast has to offer.

I went there in late June and they’d already reduced the menu to next to nothing. Little odd…. I love all the Giavos-owned restaurants so I hope they do well – we could certainly use some tasty morsels in the area. The restaurant already had a ‘fanish’ decor.

Great beer selection already…just spent the day in Nelson County and tasted some of that amber from Devils Backbone…Good stuff! Looking forward to Toast!

The menu looks great! Can’t wait to come in for dinner!

I had the chance to taste the Sloppy Joes at a networking function last week, very yummy! Wish you all the best and I can’t wait to see and taste the new restaurant.