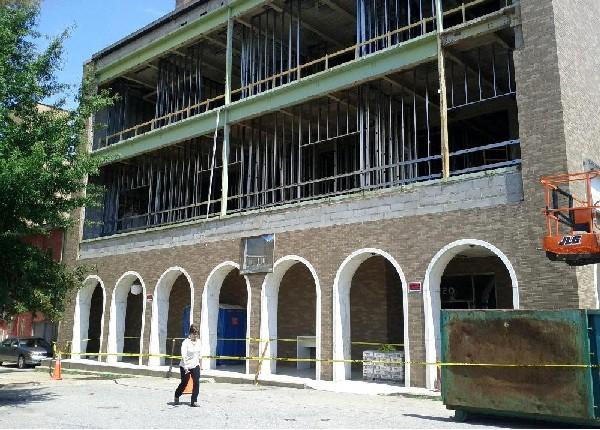 A long-vacant bank building on East Broad Street is getting a $5 million makeover.

The Monument Companies and local real estate attorney and developer Barry Wilton are teaming up to convert the old Jefferson Bank building at 115 E. Broad St. into 44 apartments.

Chris Johnson, principal at Monument, said that the developer is betting that the wave of downtown activity — including the recent John Marshall rehab, the city’s planned Shockoe Bottom refresh and the installation of the Capital Trail — will bring people in.

“This is just one of the many substantial projects happening in the downtown market,” Johnson said. “A renaissance of sorts is rapidly taking place in the city.”

Most of the apartments will have one bedroom, but there are about eight two-bedroom units, Johnson said.

Unlike many of the apartment conversions across the city, this not a historic tax-credit project.

“Because it’s not a tax-credit deal, it gave us a little more freedom to make significant changes to the building,” Johnson said. “It’s not old enough to qualify. It was built in the ’70s. But this means we can turn it into more of a hip, modern-looking structure.”

Xenith Bank is the lender for the project, Walter Parks is the architect and the Monument Companies is doing the construction. 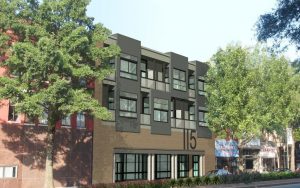 Johnson said construction should be finished by March, in time for next year’s rental season.

The bottom floor will have about 3,200 square feet of commercial space, including an 800-square-foot mezzanine. Johnson said the space would work for a restaurant. CBRE has the listing on the first-floor commercial space.

Left vacant since the 1990s, the 40,500-square-foot building was sold by Jefferson National Bank in 2001 after it was Wachovia acquired the Charlottesville-based bank.

The building changed hands several times over the years until Barry Wilton and his family bought it in 2008 for $2.1 million.

Wilton said in an email to BizSense that the property is being developed by his family. His father, Somers Wilton, developed several large housing sub-divisions in the suburbs, including Wythe Trace and Summerwood near Short Pump. This is his family’s first downtown apartment project.

$1,000+ for one bedroom units seems to be a bit ambitious for what is possibly the deadest/emptiest/most depressing block of all of downtown Richmond. One would assume this is one of those “all-utilities-included” developments where one rent bill pays for everything. Even then, $1,000 for a 1br would put it at the top end of comparable properties from what I’ve seen. I’m, of course, certainly encouraged by the activity and can only hope more is to follow. Having the balconies is probably a nice draw for future tenants but I personally (if I were a tenant)would have loved a full… Read more »

Seriously?? Not even keeping the arches!?? And I agree Jay, I was imagining a beautiful glass curtain wall as well with those tall two stories. I’m so over this cheap construction some like to use synonymously with modern…

The arches you see are on the back of the building while the architectural drawing/rendering is of the front of the building. There’s a chance that the arches will survive this rehab.

Your comments, Jay, are a very unfair characterization of Walter Parks work. He does an excellent job within the direction of the developer/owner. It think its great to see that some buildings are being developed without tax credits allowing the freedom to design more livable spaces than allowed by DHR requirements. DHR needs to relax its crazy standards and allow buildings to be transformed into real livable spaces with insulation, modern “green”windows and balconies.

I’m not sure how my comments were in any way an unfair characterization of Watler Parks’ work. I simply stated that, given the size (and shape, I would add) of the building and the fact that Walter Parks was brought on as the architects, it is very likely that many of the apartments won’t be lit by direct exterior natural light sources. Obviously that type of design decision would be at the behest of the developer/owner. The fact is, Walter Parks apparently specializes in squeezing units into places that would otherwise not accomodate living quarters (see Rob Hunt/Genesis’ new development… Read more »

While I agree all apartment buildings should allow for exterior windows, I am not sure that would be possible given the dimensions of this building. Overall, I like the modern design and I am glad to see yet another building along Broad St put back to use! If only the surface lots along Grace and Broad could see new construction soon! Haha. I can dream, at least… I have heard parking in this area now runs people an extra $60-70/month. Ouch!