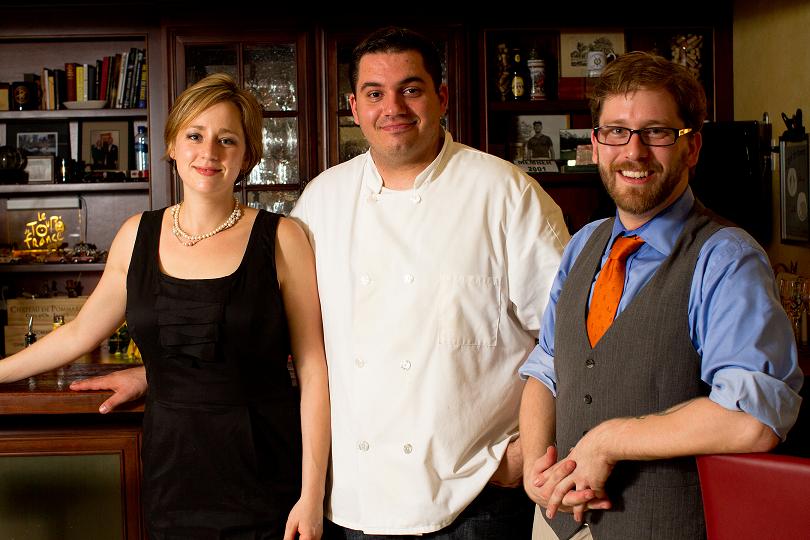 Sparatta, 30, moved to Richmond in 2011 and has spent the past year working at Marchant’s other restaurant, Pasture, on East Grace Street. With their newly acquired majority stake in Six Burner, Sparatta, his wife, Emilia, and brother-in-law Mattias Hägglund will close the restaurant at West Main and Vine streets next month and reopen it in October as Heritage.

BizSense caught up with Sparatta last week to chat about Heritage, his background and what it takes to run a successful restaurant in Richmond.

Richmond BizSense: How does your deal with Ry Marchant work? Do you now own Six Burner?

Joe Sparatta: We’re buying out the majority of the business. Ry is still going to be a partner. He owns the building, and he’ll be maintaining a minority share.

RBS: When did you find out it was for sale?

JS: It was never really up for sale. He approached us with an offer. I’ve been working at Pasture for the past year, but since I started there I made it very clear that I wanted to open my own restaurant.

It was challenging to find a space with limited funding, and he had managed to successfully use historic tax credits to open Pasture. We wanted to get his advice, so the three of us approached him with our idea. My full intentions to find a space for a restaurant were put out there. That’s when he brought up the idea of buying Six Burner.

RBS: Why was he selling?

JS: He’d put a lot of himself into that restaurant, and I think he was ready to take a step back.

RBS: Why did you move from New Jersey to Richmond?

JS: My wife’s family is from here. We had a couple of offers to open a restaurant up north, but it’s just really challenging as far as financing goes. At Elements, the restaurant we opened in Princeton, N.J., our liquor license was $750,000, and the build-out was $5 million.

Aside from that, I’m really loving the sense of community [in Richmond] — especially the chef community. Everybody is really trying to help each other out. It’s not always that way up north. And I think there is a lot of room for growth here. I think Richmond is becoming the kind of dining destination that Charleston, S.C., is.

We really need to try and connect those dots. A lot of times people coming from New York City will stop in D.C. but will skip Richmond on their way to Charleston. I think we can add to the growing body of great chefs and restaurants doing great things here in Richmond.

RBS: When are you shutting down Six Burner?

Saturday, Sept. 8, is its final service. We’ll get in after that and do some renovations. We should be open Oct. 2.

RBS: How’d you get into the restaurant business?

JS: I’ve been doing this since I was 14. My father was a chef, and I was sort of forced into the restaurant industry to keep me off the street and out of trouble.

My father was the chef at the Ryland Inn. [The Ryland Inn was a well-known French restaurant in Whitehouse Station, N.J. It closed in 2007 after a flood cracked one of the load-bearing beams in the building.] I worked there for a time, and after that I knocked around the typical Italian restaurants in New Jersey.

I was getting pretty tired of it all. So I walked into the Ryland Inn. I talked to Chef Craig Shelton, told him my father had worked here, that I had lived on the grounds and I convinced him to let me help out. I started out working for free for several weeks, and then I started making $6 an hour there for about a year. But it was an incredible learning experience.

I learned to cook in the traditional French style, which is pretty much forced labor and you work your way up. But it was great experience. They were all about teaching and growing cooks into real chefs. By the time I left, I had worked at every station in the kitchen.

RBS: The restaurant industry is notoriously difficult. What’s the secret to a successful restaurant?

JS: It’s really just focusing on your margins and keeping your costs down. The people who just want to throw food on a plate or mix drinks without costing things out — that’s when you fail.

It’s a huge risk, and we know what we’re getting into. The margins you make are slim. But you don’t get into this job to make a lot of money. If we make enough to live and be happy with what I do, that’s enough for me. We’re going to really monitor our costs and focus on getting people in the chairs.

We know we have to keep the price points low. It’s challenging, going from a $32 halibut entree to an $18 flounder entree. And even that’s a lot for down here. Money is tight right now for everybody, and it’s important to remember that.

RBS: There are a lot of restaurants opening locally. How are you going to stand out?

He has a great taste for affordable wines. My wife has a great palate for wine, and we’ll have a great wine list. Most people are lucky to have two of those things: a great menu, great cocktails and wine list.

I think having the three of us as a team — we have some serious training.

I know Elements well. I’m also very familiar with what Craig Shelton did for The Ryland Inn. Joe has clearly been a part of some tremendous success stories in the business and we wish him all the best with Heritage.

Thanks for the vote of confidence, we really look forward to seeing you at Heritage.

I won’t miss 6 burner, I found it pretty boring, so I’m excited to try the new place

I’m glad to see something new in place of Six Burner. Tried it twice. Thought it was fine but never thought about going back and can’t recall another person talking about it. I hope the new venture will be more memorable.

Joe – I eat out 3 or 4 times a week. I’ll give you a try for sure. And I’ll keep coming back if you deliver the qpr

We look forward to seeing you!

Although we have moved from the Fan in Richmond, we return often and look forward to what the Heritage will bring to the table. My experience with 6 Burner wasn’t so good. Over-salted food made me think the chef was a smoker.

Sounds good to me. Hope the wine list is adventurous and exciting. Some great distributors in the area to look at are Williams Corner Wines, Potomac Selections, Wine Traditions. Avoid Republic National and Associated Distributors. Please god no Chateau Ste. Michelle or 14 hands crap.

WOW! The Ryland Inn. I grew up in Whitehouse and my house on Clark Lane was a short walk through the cornfield to the Ryland Inn. A buddy of mine and I used to crash some of the picnics during the summer. The last name is familiar, so I’m assuming I knew someone in the family.

Thanks for the support and advice everyone! We look forwards to working hard and serving our city.

Congratulations on Heritage! I am looking forward to supporting your new endeavor. Can’t wait to see what is on the menu opening week!