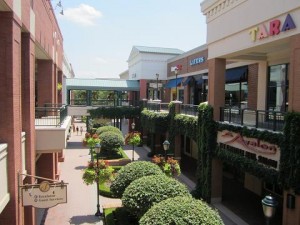 A sunny day for shopping at Short Pump Town Center.

Henrico, Chesterfield and Richmond retailers raked in about $2.87 billion in total taxable sales from May to July. That’s a $220 million — or 8.3 percent — increase from the same period last year, according to recently released data from the Virginia Department of Taxation.

The department releases taxable sales figures at the end of every quarter. It factors in receipts from retailers, wholesalers and manufacturers across the state and includes grocery stores, big box chains, mom-and-pop shops, restaurants and entertainment venues.

This is the second consecutive year in which numbers for the second quarter improved.

A few categories saw large increases during the quarter. Electronics and appliance sales more than doubled from $16.9 million in the same quarter of 2011 to $35.9 million in 2012. And local shoppers spent about $7 million more on clothing, shoes and accessories this year.

Gary Weiner, president of Henrico retailer Saxon Shoes, said he noticed the trend at his business. Weiner reported a 7 to 8 percent jump in sales from the same time last year at his Short Pump location.

“From what I’ve seen, everyone seems to be doing a little bit better,” Weiner said.

Weiner said he’s hired about a dozen salespeople to keep up with renewed demand and plans to recruit six to 10 more this year.

“We’ve had a strong demand for key brands, we have a deep inventory, and we’ve tried some new ways to bring in customers,” Weiner said. “The key is to stay creative.”

Grocery sales, however, were $417 million for the quarter, up $16 million, or 1.4 percent, from the previous year.

Big box and department stores brought in about $418 million during the quarter, up from $405.5 million in the same period last year. Book, music and other hobby shops held steady at $48 million.

Adam Othman owns Tobacco Club and Gifts and several mini-marts across Richmond. He said that sales at his shops have been steady.

“If I’m up or down $3,000 from one quarter to the next, it’s not going to make that much of a difference in the long run,” Othman said.

Cameron Poindexter, manager of Carytown boutique Phoenix, said she gauges the shop’s success by comparing her sales to the previous year. She said the summer months of the second quarter are usually the slowest for her shop. After moving across the street to a bigger storefront last year, she said she was nervous her sales would suffer.

“I thought we would be way down from last summer, but we actually saw a bit of an increase,” Poindexter said.

She said the strong summer quarter probably bodes well for fall and the holiday season, but it’s hard to tell.

“If I could put my thumb on what exactly makes retail tick, I would be a very wealthy woman,” Poindexter said.