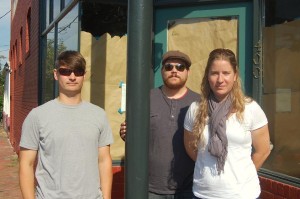 (from left to right) Phillip Perrow, Caleb Shriver and Michelle Shriver are the brains behind Church Hill’s newest restaurant.

A new restaurant serving farm fresh produce and local ingredients is sprouting up in Church Hill.

Owners Phillip Perrow, Caleb Shriver and Michelle Shriver will launch Dutch & Co. by the end of the year. They’re overhauling an old laundromat they leased at 27th and Marshall Streets.

“Church Hill has such a quaint feel to it — it almost doesn’t even feel like it’s in Richmond,” Michelle Shriver said. “We really love the space.”

Perrow said they found the building in late spring, and construction has moved quickly. The bar is almost installed, and the owners are swapping the old washers and dryers for ovens and refrigerators.

“The menu is not going to be printed, laminated and never changed,” Michelle Shriver said. “A customer might come in one day, try something, and three weeks later it might not be there anymore.”

Perrow said he wants the food to be creative but approachable.

“We’re going to have fun with it, but not take it too far,” he said.

All three of the owners started in the restaurant business when they were about 17 years old. Perrow and Caleb Shriver man the kitchen at Aziza’s, a Lebanese eatery on East Main Street. Michelle Shriver works the front of the house at Acacia.

Perrow said they’ve talked about going out on their own for a few years, but everything fell into place when they saw the Church Hill space.

“I think when you get into this business, most people want to end up owning their own place,” Perrow said. “You want to be able to put your own stamp on a restaurant. That’s what we’re trying to do here.”

Captain Buzzy’s Beanery, the Hill Cafe, the Roosevelt and Alamo BBQ are all within walking distance of Dutch & Co.

“We’re definitely in great company,” Michelle Shriver said. “But our goal is to not be exactly like anyone else. We’re not going after one type of food. We’re going to let the product speak for itself.”

That map represent what, exactly?