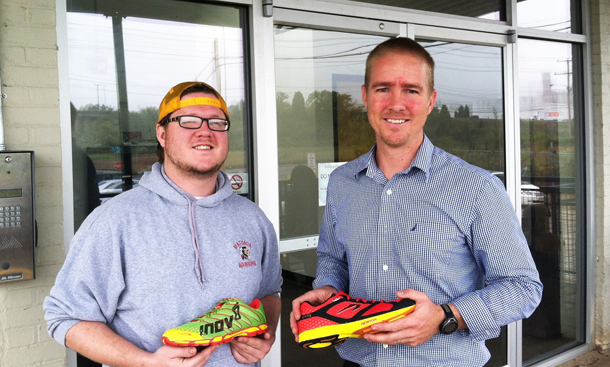 An online business that began in Dallas is up and running in its new headquarters in Richmond.

Natural Running Store, which sells minimalist running shoes, relocated this summer to a warehouse in Manchester.

Founder Patton Gleason launched the company almost two years ago out of his garage in Dallas but moved to Richmond after seeing the bulk of his orders come from the East Coast.

He leases a small warehouse and office space from Fountainhead Properties on 715 E. Fourth St. Gleason said the building met the needs of his four-person company and didn’t require any renovation.

Natural Running Store sells six lines of minimalist running shoes and other training accessories. The shoes are all lightweight, with little to no padding or heel elevation, and emulate barefoot running while protecting feet from cuts and scrapes.

“The connotation of natural running is still evolving,” Gleason said. “It means different things to different people. I think it’s really just about enhancing the really great things your feet already do.”

Before going out on his own, Gleason spent several years with Texas-based fitness chain Luke’s Locker. He launched his own store to focus exclusively on natural running gear. For the first few months, he said, orders were few and far between, but sales started picking up through word of mouth. He declined to share sales figures.

Natural Running Store ships products globally. Some of their top-selling items, from brands such as Altra, Inov8 and Newton, range in price from about $60 up to $175.

There’s no shortage of options for Richmond residents looking for natural running gear. Carytown-based Road Runner, a running shop that’s been in business since 1983, also sells minimalist shoes, and online retailers such as REI and Rogue Fitness carry comparable brands.

Gleason said he plans to stand out by combining the convenience of online shopping with the personal advice of a brick-and-mortar store. About 20 customers contact the store every day, asking for tips on which shoes to buy or how to train. Gleason said answering these questions is a big part of his business.

Spencer Beasley, a sales associate at Road Runner, said that the shoes were popular when they first got them in stock but that sales plateaued.

Beasley said minimalist shoes allow for a more natural feeling and engage more muscle groups than traditional shoes with more padding. But the change can be jarring for casual athletes or experienced runners who are used to padding and heel elevation.

“People who’ve been running 20, 30 years try to jump right into long distance runs with these shoes,” Beasley said. “You can’t really do that, and we’ve seen a few injuries from it.”

For the past three to four years, manufacturers have tried to develop more lightweight shoes, said Jon Lugbill, executive director of Sports Backers. His nonprofit company hosts several races around Richmond every year.

Gleason, the Natural Running Store founder, said that natural shoes are the reason he’s running today. In 2004, he tore his Achilles tendon while training for a marathon. It took him about a year to recover, and he credits natural shoes for helping him develop a better, more efficient technique.

“Up until then, I’d spent so much money on special inserts, top of the line running shoes,” Gleason said. “It was a kind of epiphany moment for me.”

I found this article very interesting and inspiring. Just curious if your familiar with Invisible Shoes. I run 80-100 miles a week in them and absolutely love them. Might be a shoe to carry. Their website is http://invisibleshoe.com

Thanks for the great feedback and suggestion. Sasha and his team at Invisible Shoe have a really interesting product and philosophy. It is great to hear you have had a positive experience with them.

I would love to hear more about your running experience. Feel free to drop me an email at patton @ naturalrunningstore.com.

Another great sandal resource (made here in the Commonwealth) is a great company based out of Harrisonburg called Bedrock Sandals.

See you on the trails!