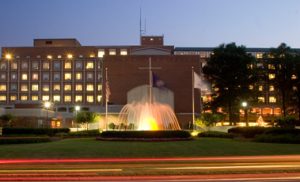 As of Oct. 1, Medicare will penalize hospitals if too many patients are readmitted less than a month after they are discharged. The readmission penalties were part of the 2010 health-care overhaul but are just now taking effect.

The penalties are aimed at getting hospitals to improve after-care programs to reduce the number of return patients, thereby cutting costs for the country’s health-care system.

Many of the eight local hospitals facing penalties have started budgeting for them.

Hospitals receive a dollar-for-dollar reimbursement when serving Medicare patients. Under the penalties, Medicare will not reimburse up to 1 percent for hospitals where the readmissions rates are considered too high according to the new standards.

The penalties for the first year won’t exceed 1 percent of total Medicare reimbursements, a drop in the bucket for most hospitals. But the penalties could increase over the next several years, and the law raising awareness about lowering readmission rates now, said Ron Clark, chief medical officer for VCU Health System.

“I don’t think the final dollar figure is going to be enough to disrupt the financial ship,” Clark said. “That’s not the point of what Medicare is doing. They’re trying to draw attention to this issue.”

According to Kaiser Health News, which analyzed the most recent numbers from the Center for Medicare and Medicaid Services, VCU Health System will incur a .38 percent penalty this year based on its readmission rates.

Clark said the final dollar amount would vary depending on how many claims the hospital files over the next year. For 2011, the VCU system’s total operating revenue was $1.7 billion, according to the hospital’s annual report.

Clark said VCU has an average patient readmission rate of between 12 and 13 percent. To prepare for the penalties, he said VCU has expanded a program that coordinates care for patients after they leave the hospital in attempt to keep readmissions to a minimum.

Nationwide, Medicare will withhold about $280 million in payments over the next year through the new penalties. The penalties will be taken out of each individual claim a hospital files with Medicare. If a hospital hit with the maximum penalty of 1 percent files a claim for $10,000, Medicare would only reimburse $9,900.

If readmission rates increase, the penalties could go up to 2 percent the following year and 3 percent the year after.

“That’s not an option, in my opinion,” said Melinda Hancock, chief financial officer for Bon Secours Health Systems in Virginia. “When you start talking 2, 3 percent, that could be a multimillion-dollar hit for us.”

Bon Secours Health Systems runs four hospitals in the Richmond market, three of which will incur readmission penalties over the next year, according to the Kaiser data. Richmond Community Hospital avoided the penalties.

Hancock said Bon Secours has been aware of the penalties for years and budgeted accordingly.

“It’s not going to be a big hit to us,” Hancock said

Rick Mayes, a University of Richmond associate professor who studies Medicare policy, said these penalties were one of the first steps in a long process toward making the health-care industry more cost effective.

“There’s sort of a never-ending quest to reward doctors and hospitals who offer high quality care,” Mayes said. “[The federal government] is going to go through different kinds of carrots and sticks.”

Mayes said these penalties could disproportionately affect hospitals that serve low-income populations that rely more heavily on the Medicare program.

“For some hospitals, these penalties could be the difference between being in the red one year and the black the next,” Mayes said.

Unfortunately this article fails to report that recent major studies show these types of penalties don’t work and the costs just get passed on to the patient. See yesterday’s Wall Street Journal on the latest study.

Again, dollars are more important than one’s health. If you are in the hospital for surgery you should wait at least more than 30 days after discharge to have the heart attack.