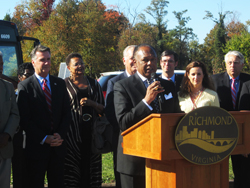 The Redskins have found their home in Richmond.

The City of Richmond announced Monday at a news conference that Bon Secours will be the naming sponsor for the Washington Redskins’ new summer practice facility behind the Science Museum of Virginia, near the intersection of DMV Drive and Leigh Street.

As part of the deal, Bon Secours is building medical offices for a sports medicine program and a men’s health clinic at the facility.

Bon Secours will also have the naming rights on what will be known as the Bon Secours Training Center, Mayor Dwight Jones said.

NFL training camp generally runs for three weeks from the end of July through the middle of August and usually is free and open to the public. The Redskins will be practicing at the new facility in 2013.

The fields will be available for Richmonders to use when the Redskins aren’t around, “so long as they aren’t used too hard,” Jones said.

Redskins general manager Bruce Allen, a University of Richmond graduate, said he thought moving training camp to Richmond would have a positive impact on kids in the area.

“When a child has a chance to meet a player, it can change their life,” Allen said.

Allen said that he didn’t know where the players would stay while they are in town but that the organization would be working with local hotels.

And Bon Secours’s plans don’t stop at naming a football facility. At the news conference, the mayor also announced that Bon Secours is building a 75,000-square-foot medical office building at the corner of Patterson and Libbie in Richmond’s Near West End and a 25,000-square-foot building adjacent to a current hospital in Church Hill, adding about 200 employees.

The financing for the practice fields is, according to the mayor, “complex.”

City manager Byron Marshall said the training site would cost about $9 million. “That includes two fields, the locker room, the medical offices all of that,” he said.

The money in the short term comes from a $10 million loan from the city’s Economic Development Authority. Marshall said Bon Secours was fronting about $3 million for the naming rights and is leasing their medical offices for 10 years.

“In all, it’s going to be about $6.4 million between the naming rights and the rent on the offices,” Marshall said, referring to Bon Secours’s role in the deal.

The land, about 17 acres, is owned by the state and will be leased to the city. Right now there is a parking lot, a community garden and a recycling station on the land.

Tammy Hawley, the mayor’s press secretary, said that a general contractor had not been chosen and that the process for selecting one was being handled by the Economic Development Authority and not through the city’s normal request for proposal process.

All bids for the project would go through EDA, she said.

The Redskins’ facility is located near the rapidly changing intersection of Broad and Boulevard, anchored by Rebkee’s Interbake Cookie Factory apartments.

Rob Hargett, a principal with Rebkee, said any development in the area was good for his project. But he said he wasn’t sure it would have a huge effect for him.

“I suppose it makes my site a little more exciting — we’ll have some pretty nice box seats to watch practice three weeks out of the year — but I’m not sure what it adds to the leasability of the units,” he said.

I think this is a great move for the city. With all of the investment and redevelopment including the residential projects in this area, the Boulevard and surrounding area continues to get stronger and contribute to the success and vitality of the city. Welcome to the Redskins!

Yep and with the possibility that the city is clearing land for a new Squirrels stadium about a half mile away really will help spruce up that neighborhood.

Love the skins but this deal (still want to see details) smells as the Libbie and Grove is a multi-million dollar historic Westhampton school buildings and is PRIME real estate. So is this just thrown in for free?