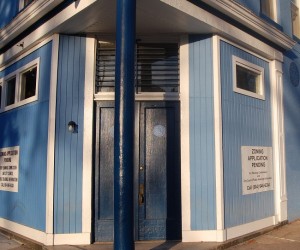 The site of Bunnyhop’s new location on Laurel Street in Oregon Hill.

A six-year-old local bike shop is peddling into a new neighborhood.

Bunnyhop Bike Shop is set to open its second location this winter in Oregon Hill.

“We ran out of room about two years ago, and we were waiting to find a space that was a good fit,” Stevens said. “I think we found it.”

Stevens said a good portion of his customer base lives in Oregon Hill, so leasing the first floor and basement of 349 S. Laurel St. seemed like a natural next step for the business.

The new shop is about 3,000 square feet, double the size of Bunnyhop’s Grace Street location. Stevens said that he’s had as many as 60 bikes in the shop for repair at one time and that space can get a little tight.

“This new location has much higher ceilings. It’s going to give us some more room to display merchandise,” Stevens said. “It’s a big transition for us. We’re growing up.”

When Stevens opened the first location in 2006, he said Bunnyhop was one of just a few stores in the city that catered to Richmond’s bike-riding population. Now there are at least half a dozen in the downtown area alone.

“The stakes are a lot higher this time around,” Stevens said. “There’s a lot more competition, and I’ve got four employees to consider. It’s a little more to worry about.”

He said Bunnyhop would try to stand out by offering quick turnaround times on repair work and affordable prices on parts. 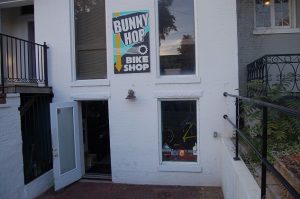 Bunnyhop’s original location on Grace Street in the heart of VCU.

Once the Oregon Hill location is up and running, Stevens said he plans to hire two more employees: a full-time salesman and someone to handle marketing.

Stevens is leasing the new location from developer Nolen Blackwood, who owns the space. Blackwood, a principal with Blackwood Investments, bought the building this year from SynerGeo, a community activism organization.

“They left the building in good shape,” Blackwood said. “It’s still very clean, and it’s going to require a minimal amount of renovations.”

Blackwood said that, after talking to the local neighborhood association, he thinks a bike shop will work well in the space.

“Parking is a bit of an issue in that area, so the fact that it’s a bike shop should really help with that,” Blackwood said.

Stevens would not share what the costs will be to get the second shop up and running but said he’s handling most of the build-out himself.

I am thrilled to hear about the expansion of Bunny Hop Bike Shop! My experiences with Luke and his team have been nothing but professional and of sheer delight. Welcome to the neighborhood!

Great news! Good care for my bikes around the corner.

This is awesome news. I’m sure that it will be as successful as the first one. Congratulations on all your hard work!

Hello, glad to see the hill moving in a positive direction . This was one of our beloved hangouts ,we used to hang out on majors corner and pitch quarters and socialize. It was the place to be seen. So many memories here, congratulations on your new location . A bike shop seems to be a perfect fit to the community now!

I bought a bike from them about 5 years ago. I just needed a nice older bike that had been reworked. Nice, but no frills. It was cheaper and rides better than anything I could have bought new. Those guys did me right!