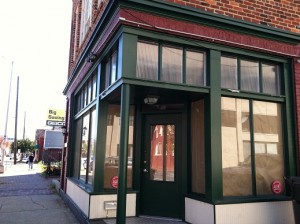 A pair of Capital Ale House employees are splitting off and launching their own restaurant in Jackson Ward.

Jay Bayer and Adam Hall are getting ready to open Saison in the former Marshall Street Cafe and Jazz Bistro at the corner of Marshall and Adams streets just off West Broad Street.

“Saison is a new concept that I think is pushing what’s available in Richmond and in the neighborhood,” Bayer said.

He and Hall purchased the assets, including the ABC license, of Marshall Street Cafe, which closed in late August. They plan to open Saison in late November. Bayer would not disclose the purchase price.

Bayer and Hall are leasing the space from owner the Hanson Company, run by developer Kelvin Hanson.

Saison will feature Southern-style food with a Latin American touch.

“Chicken and waffles is a classic Southern dish,” Bayer said. “Our version would be a sweet potato waffle with a buttermilk-marinated duck breast and cilantro-lime zest.”

Prior to his time at Capital Ale House, Bayer worked at Galaxy Diner. It was while he was at Galaxy that he started getting into craft beers. After studying brewing at Chicago’s Seibel Institute, he returned to Richmond and applied what he learned to his job bartending at Capital Ale House.

There he met Hall, the kitchen manager at the downtown location. The two started developing a business plan for Saison and talking with banks about financing.

“We wrote up this awesome business plan and went around to all the banks we knew that did lending for restaurants,” Bayer said. “And they seemed interested, but when they saw what we were doing, they were like ‘Oh, startup restaurant? See ya later.’”

To start Saison, Bayer and Hall pooled their savings and found some private investors.

“The good thing is I don’t have to pay anybody interest,” he said. “We’re going for a rustic, farmhouse look in the space, and we’ll be using a lot of reclaimed materials so it will keep the costs down.”

The restaurant will seat about 30 in the dining area and 10 at the bar, he said.

I wish them all the success in the world. It’ll be nice to have something along that stretch in J. Ward.

But something to consider:

At the price it may be difficult to become more than a “special occasion” place for many vs a ‘regular favorite” among locals.

Best of luck! Sounds like an amazing concept and delicious dishes! I cannot wait to try it!

I’ve known Adam nearly my whole life and Jay for a couple years.

These two are hard working and very versed in their profession.

Expect high quality and new creative ideas from these guys!!

You fellas are gonna do great, I’ll be sending people your way!!

It would appear that these two men have a deeper knowledge of the restaurant business and and interesting insight into menu selection, including a diverse beer selection. I am looking forward to the unique pairings of libations with the menu items. The merging of southern cooking with a modern twist has been done before, but not locally, so this will be a great addition to Jackson Ward. The prices may appear steep, but as long as they provide unique flavors with reasonable portions and good service, customers will keep coming back for more. looking forward to their opening and wishing… Read more »

Thanks for the well wishings all!! We are very excited to bring our knowledge, vision, and passion to this concept and to the amazing Jackson Ward Neighborhood. We have assembled an amazing team of industry pros as it is a core belief of ours that service, product, and atmosphere will determine our success. We aim to deliver seasonally sensible food and drink in clever and creative preparations. There will be great offerings at multiple price points which we hope you all find intriguing and delicious. We hope you all come by and check us out, and we can’t wait to… Read more »

Looking forward to your opening and wish you all the best.

Offer something different in the craft beers than can be found at every other bar. It already sounds like the food you will offer is different than other local places. I will definitely come by and try this. Look forward to a spot to have food and a good, unique brew before going to downtown events and love historic Jackson Ward. Open up already, I want a beer.