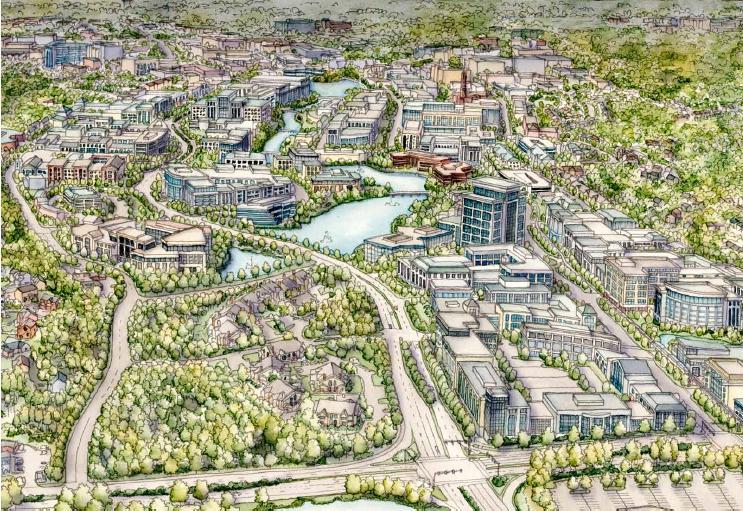 A rendering of the proposed changes to urbanize parts of Innsbrook.

A plan to turn Innsbrook into a massive urban mixed-use development isn’t sitting well with some of the neighbors.

David Cummings, a resident of the Cedars at Innsbrook and a board member of the neighborhood’s homeowners association, said the group is speaking out against Highwoods Properties’ push for redevelopment when its plan goes to the planning commission next month, arguing that their concerns about the urbanization of Innsbrook have gone unheeded.

In a letter to Richmond BizSense, Cummings and the Cedars at Innsbrook Homeowners Association detailed concerns including the size of the proposed buildings, traffic and density.

“Highwoods has a grand vision for the future of Innsbrook,” the letter said. “Please understand that we have a vision also ? of quiet, peaceful, private enjoyment of our homes.”

Highwood’s plans for Innsbrook – a 1,300-acre suburban office campus off of West Broad Street in Glen Allen – call for the development of 415,000 square feet of retail, 1,000 hotel rooms and 6,000 apartment and condo units, along with 3.5 million square feet of office space. The development would take place on 188 acres of Innsbrook over 20 years at an estimated cost of $2.4 billion.

“Just like West Broad Village, which is just a mile away, Highwoods Village would have apartments, retail shops, high-rise commercial office towers, entertainment venues, townhouses, and who knows what within the next 20 years,” the letter said.

“In a few years, urban parking decks and high-rises would be the norm around the area that now has a distinct suburban feel.”

Today, the Innsbrook submarket consists of about 5.5 million square feet of office space spread out over more than a dozen buildings.

The Cedars at Innsbrook is a nearly 100-home subdivision on the northwest border of the office park near Nuckols Road. The letter said that Highwoods has worked with nearby neighborhood associations but that residents are unhappy with the results.

“In spite of the several ‘community meetings’ that have been held by either Highwoods or the Henrico County reps, the residential community has not been as recognized or protected as it should be to this point,” the letter continued. “The presentations that Highwoods has given up to now have had the tone of ‘this is what is coming, like it or not.’ The homeowners have raised multiple concerns, but very few have even been acknowledged and the homeowner suggestions have been largely ignored.”

Cummings and the Cedars at Innsbrook Homeowners Association argued that the planned buildings would be too large and that the introduction of late-night businesses such as bars and restaurants would make the surrounding communities less safe. The group is also concerned about the introduction of renters into the community and potential effects on property values.

Calls and an email to Highwoods were not returned by press time.

Developer Sidney Gunst, who was one of the founders of Innsbrook when it was developed in the late 1970s and ’80s, said the next phase of Innsbrook’s development is crucial.

“If Innsbrook is going to be competitive in the future, it has to become a mixed-use development,” Gunst said. “Change comes hard to people. When I started developing Innsbrook in 1979, all the neighborhoods were opposed to it. Now, if you ask them, they will have positive things to say about it.”

Bonnie-Leigh Jones, a member of Henrico County’s planning commission, said the public has had many opportunities to give input and that the county has worked extensively on the plan with Highwoods. Jones would not comment on next month’s commission meeting.

BizSense reported Sept. 19 that Highwoods was looking to develop the new urban concept on a 40-acre plot of Innsbrook starting next year.

“We’re taking 40 acres, and we’re going to try and prove the case,” Paul Kreckman, the local head of Highwoods Properties, told BizSense in September. “We want to identify what’s right and what’s wrong with the model. We’re not wedded to anything that doesn’t work.”

The Highwoods plan goes to the planning commission Nov. 8. Click here for the meeting’s preliminary agenda.

Here’s where the NIMBYs never get it… Highwoods agreed to let you offer your opinions. They DID NOT agree to let you design the project. THEY own the land. THEY get to decide what they want and if its within reason – which it MOST CERTAINLY is – they get to build it. Too many Richmonders think because they own a home, they get to decide what private property rights others have. You don’t.

Here’s the thing: you buy a house in a suburb. You like the sylvan surroundings, the quiet, the space. 10 years later, you look around and see that the suburban glade you bought in to is becoming more citified. This is inevitable – change, I mean. What the community at large values will often trump individual wishes. Which is why you can sell a house and move somewhere else. I can appreciate that the folks who live in the Cedars might not like living close to mixed-use urbanized development. It does not mean that they can prevent development. I predict… Read more »

Didn’t the name of the development tell you something when you bought a house in The Cedars AT INNSBROOK which is part of an office park????? If you want peace and quiet buy a house in Goochland.

What a joke. Here you have someone willing to invest in the neighborhood and drive up property values and they are angry about it? Move. There are plenty of other crappy suburban neighborhoods to choose from. When you move into an office park, expect things to grow. Not everyone enjoys the wide open beauty of asphalt parking lots.

I own a condo/property owner in Innsbrook, and could not be more THRILLED with the prospect of Highwoods future development in the area!!!!! Given declining property values over the last 5 years, this should be a welcome change!!! Embrace change, people! And if you are looking for peace, serenity, space and quiet… I suggest you seek out a more rural address.

As a homeowner in the Cedars at Innsbrook neighborhood, I’d like to clarify that we are not completely opposed to the changes and development. Yes, when I bought my house, I was aware that I would live next to an office park. I enjoy living here and being located in such a convenient area. I think it would be nice to have the proposed retail and restaurants within walking distance of my home. One of our top concerns is the traffic that the new development would bring. Currently, the morning and afternoon traffic is miserable getting into and out of… Read more »

Interesting discussion. I have been wondering what happened to the plans out there that were announced so long ago. Thanks for the insight, David!

I was deeply involved in the the development of a full service Hilton Hotel in Innsbrook back in the mid 80’s with Kemp Rowe and Sidney Gunst and at that time the Innsbrook development zoning required a very high “green area” around each commercial building. 40% comes to mind as the requirement. The rendering in this article does not indicate a high green area requirement, but rather a more dense commercial development.

“just move”? Are you serious? In this economy & housing market? Short pump/glen Allen area is way too much now. L

Sidney… I can not believe that you havent reaped enough financial benefit from the land as it is… Please do the right thing and develop or not develop free space, greenery, etc

Henrico has the best intentions towards infrastructure improvements just consult their highly touted but unpublicized Comprehensive Plan. Anyone who has been impacted along the North Gayton Road Extension knows Henricos position. However in their ‘vision for the future’ they forgot to address the current traffic situation and extend the roads running through Innsbrook. Maybe it has to do with the fact that its much easier to push individual property owners around through eminent domain then one giant company. I sincerely hope that through these meetings there is a sincere effort to find a compromise with every party involved. Keep reporting… Read more »

One of the main reasons they are building it is to ease traffic. If you live there and work in the building next door, you won’t have to drive and if there are restaurants next door to where you work, you won’t have to drive to eat lunch. The reason the roads are screwed up out there is because the NIMBYS think they know best. They don’t want the road here so they move it there and then the grid has been laid out by the uneducated citizens instead of the professionals. Why do you think 295 and 288 miss… Read more »

Julie, a few points: – Very rarely does a person have any ability to ‘future-proof’ their home against development. If you buy a home next to an empty lot, there is no reasonable expectation that the lot won’t be developed (e.g., a house will be built). Of course you didn’t purchase in a neighborhood next to a mixed-use development; I’m sure whoever owned the farm land said the same thing when the developers started building sprawling suburban neighborhoods. -“Traffic is already a nightmare – the proposed denisty of this project will only make it worse. ” Not necessarily. Density does… Read more »