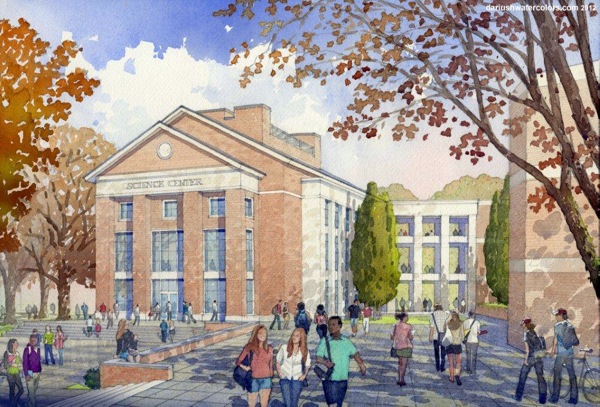 Since Lindgren took over in 2006, the school has added almost 200 students to its enrollment, raised $81 million for new construction and added four new majors.

The private liberal arts school of about 1,300 students is building a $6.3 million student commons building and next year plans to add a 100-bed residence hall.

BizSense caught up with Lindgren to talk about the school’s growth, the business of education and college sports.

Richmond BizSense: There is a lot going on at Randolph Macon. What’s driving it?

Bob Lindgren: We have a goal of 1,500 students. For about 20 years, we were at 1,100 students, so we’re getting there. We’ve grown about 15 percent, so as part of that we’re having to add residence halls. We’re a quintessential liberal arts college: Most of our students live on campus all four years.

RBS: What other buildings are you planning?

BL: I think the big one is our new science facility that we’re raising money for right now. It’s going to be 27,000 square feet and will cost about $13 million. We’re also planning renovations to our existing science building.

The way science is taught has changed, so we need to update our facilities. That should be in the next two to three years, depending on how fast we can raise the money.

RBS: What puts pressure on those tuition rates? Why is it so expensive?

BL: Two things: We’re providing this hand-tooled educational experience, with a lot of individual attention. We have an 11-1 student-teacher ratio. It’s a much more expensive form of education. If you look at bigger schools, the only way to increase productivity is having more students in the classroom.

And at the same time we don’t get state support for buildings or scholarships. Our students do get a Tuition Assistance Grant, or TAG, in Virginia. That totals $10,500 over four years.

RBS: With whom do you compete for students?

BL: Primarily Virginia state schools. About 70 percent of our students are from Virginia. James Madison is our biggest [competitor].

RBS: How many applications did you get this year?

RBS: Shifting gears a little bit, how do sports factor into life a Randolph-Macon?

BL: It’s a big part of what we do. About 40 percent of our freshmen are intercollegiate athletes. At Division III, they have a chance to be a student first while still gaining all the same life lessons such as teamwork, winning and losing, and working hard in a very competitive environment. We’ve put money into improving our facilities without going over the top.

RBS: George Mason, the University of Richmond and Virginia Commonwealth University have carved out national reputations in recent years by making runs in the NCAA basketball tournament. Is there any pressure for you to keep up?

BL: No. It’s not realistic.

You know, three years ago we went to the Final Four in Division III. Not that many people noticed. There were a couple of stories in the Times-Dispatch, but it certainly doesn’t get the kind of national attention that the big Division I tournament gets.

That’s one of the reasons [our programs work] so well, because there are not the associated issues around publicity and travel that force students to make decisions between academics and athletics.

Before coming here, I spent time at the University of Florida. So I’ve certainly seen what it’s like in the big Division I schools. And it’s great, the relationships and the publicity you receive. But those students certainly aren’t getting the same kind of education as our athletes are getting. I much prefer this system.