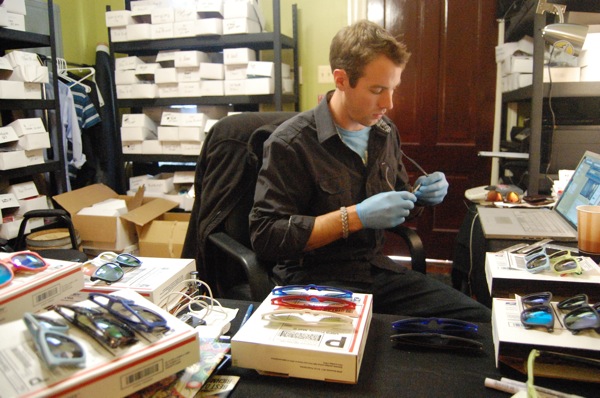 Tucked away in a small workshop in the Fan, Sean Holmes dons blue surgical gloves and pieces together his young company’s products one arm and one lens at a time.

Since Holmes and Dylan Roukous launched Nectar in February, they’ve shipped 25,000 pairs of trendy custom sunglasses to people and retailers in 49 states.

Holmes, a Richmond native, assembles and ships every pair by hand out of the office at 1521 W. Main St. Nectar was initially founded in Atlanta, but Holmes moved the company to Richmond three months ago. Roukous lives and works in Florida. The company receives financial backing and business assistance from local businessmen Jake Crocker and Wil Dickerson.

Nectar sells its glasses for $13 to $25 a pair. About 70 percent of the company’s orders come through its website. The rest are sold in retail outlets across the country, including three shops in Richmond: West Coast Kicks, Venue Skate Shop and, of all places, Coppola’s Deli downtown.

BizSense caught up with Holmes, a 25-year-old Virginia Commonwealth University graduate, to talk about the company’s move from Atlanta to Richmond and what’s next for the startup.

Richmond BizSense: When you started the company, did you ever imagine you’d be at 25,000 pairs sold by this point?

Sean Holmes: No. I remember one day staring at a wall and thinking, ‘I just ordered 6,800 pairs of sunglasses. Please God, work.’ I was really far from home. I’d started a fitness company that wasn’t doing well. My family wanted me to come back to Richmond. But we just had a feeling about it.

RBS: How many pairs do you make a day?

SH: If we make a big sale or a retail space needs to be restocked, probably a few hundred. About two days ago, I was in here until 1:30 in the morning, I did about 295 pairs. It took a while. But I’ve got it down to a science now. I can do a pair in about two minutes.

RBS: What does a typical day look like for you now?

SH: This actually isn’t my full-time job. I’m also a waiter at an Italian restaurant, so I’m working 24/7. If it’s an ideal day, I’ll get to the office at 8 a.m. and work until about 3:30 p.m. Then I’ll go into the restaurant and work until about 10:30 p.m. After that, I usually jump on the computer, and Dylan and I work on marketing and talk about ideas for the future. Usually by that point I’m so tired I just want to lay down and do nothing, but I know if we just keep grinding it’s going to be worth it.

RBS: Have you seen people wearing the glasses around?

SH: I have. It’s actually a pretty cool feeling. I’ve seen families wearing them. A couple days ago, I was getting a flu shot and started talking to the nurse. Apparently she had just gone to a wedding and the whole wedding party had them.

RBS: Do you remember the first time you saw someone wearing them?

SH: It was in Atlanta, right before I moved back to Richmond. I was so busy. I had no free time. I decided to just take a break and go to a Braves game with my buddies. We were hanging out when one of my buddies goes ‘Hey! That guy has Nectars on!” I went over and talked to him. He loved them. It was just incredible, some guy in Atlanta randomly wearing our shades at a Braves game.

RBS: What were some of the startup costs?

SH: A lot of it was with the website. We had a site custom built, and it ended up not working out. The orders weren’t coming in right, and it looked kind of messy. We ate about five or six grand on that and moved on to a new platform. So that and our initial order were our biggest investment. But we were in profit after about a month.

SH: The 16-to-25 age group. Everyone seems to enjoy them or at least have fun in them. But we want that age group because they’ll help spread it the quickest. This is a less expensive product, as far as sunglasses go, but it still has that cool factor.

RBS: How hard was it to move everything from Atlanta to Richmond?

SH: That whole transition was kind of tough. We have orders coming in all the time, so I can’t really stop working. As soon as I got home, I didn’t even unpack my clothes. I just unpacked inventory, got it set up and started working again. I was living out of my suitcase for a little while.

RBS: What’s next for Nectar?

SH: We developed and patented a joint that will let people make their own combinations. We’re selling lenses and arms in a box for between $60 and $80. It’ll be 27 legitimate combinations – maybe more if someone gets crazy. So that’s a lot of shades for that much. That’s going to be a big retail push in the first few months of 2013.

Congrats on the continued success Sean.

We are proud of you Sean! Keep working hard!

I’ve watched Sean work himself down to the bone making this company work and he truly puts his heart and sould into each and every pair of glasses he sells. They’re not just “less expensive glasses,” they signify a life style of a look that doesn’t have to break the bank and still looks amazing. Sean also dedicates himself to his community with fundraisers and supports many athletes. He’s brilliant at only 25.

These are great glasses! not only for the 16-25 age range. I love mine, and they can take my abuse. I’ve gotten many compliments on them and love to show them off. Congratulations on all your hard work! Much success in the future!!

Congrats to everyone involved with the Nectar business. These sunglasses are absolutely awesome, and the guys running the show are awesome. Hopefully the big orders keep rolling!