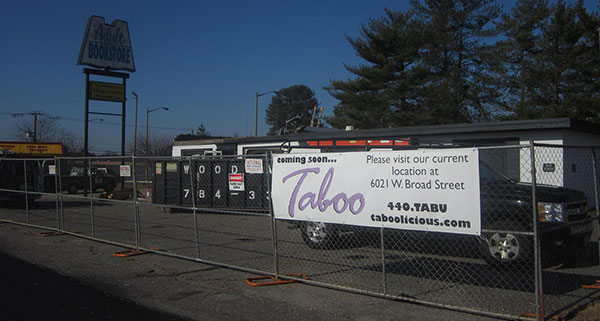 The new Taboo location will be at 5100 Midlothian Turnpike in Richmond. (Photo by David Larter)

So much so, in fact, that a local erotica shop is in expansion mode.

Alison Barber, owner of Taboo on West Broad Street, has purchased an adult bookstore at 5100 Midlothian Turnpike in Richmond. Her second location will be twice the size of her original store.

“I’ve been looking for a second building for seven years,” Barber said, “but the zoning is so strict that really the only place to open an adult business is in a location that’s already zoned for an adult business.”

Barber purchased the building, which sits on 11,000 square feet of land, for $310,000 in June. She is gutting the interior and adding a second floor to expand the sales space. She declined to say who financed the purchase and build-out of the new store.

“The previous owners had a small space in the front for a little bit of lingerie, movies and toys, then the back was a long row of video booths,” Barber said. “That’s not the way we do things. We ripped all those booths out and will use it as display space to make it a very nice, friendly, non-skeezy place. It will be a huge improvement over what’s already there.”

Barber, 34, said her goal has always been to make Taboo a place that stands out from a traditional adult shop.

“They tend to sell toys and lingerie and many of the same products,” she said. “But adult bookstores kind of have a dirty, shady, non-female/non-couples-friendly atmosphere. We want people to come in and feel comfortable, so we have a great, friendly staff. It’s important to let people know that it’s good for you to want to explore your sexuality.”

Barber, who graduated from VCU and studied fashion merchandising, bought the business in 2002 when it was known as Taboo Lingerie. She had worked at the store before buying it, and, after taking over, she shortened the name and revamped the inventory, adding toys and adult movies.

Wish her luck. Not the best of areas for an upscale place.

Per R Sweeney’s comments, and I understand the zoning issues she must have faced, but yeah really not a place that will ever attract good paying clients for any retail store.