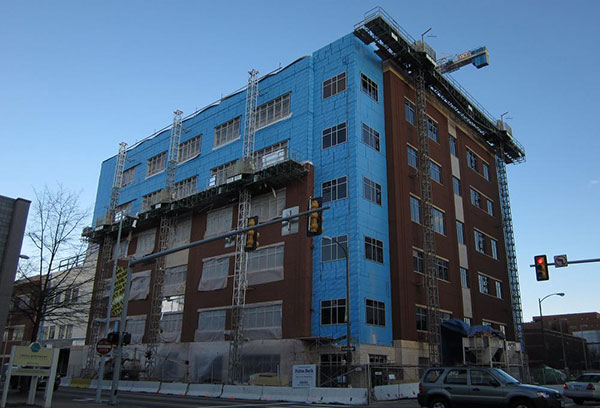 The Biotech 8 building in the Virginia Biotechnology Research Park. (Photo by David Larter)

A rapidly growing Richmond biotech firm is moving forward with the massive second phase of an expansion to its downtown headquarters before even finishing the first phase.

Health Diagnostics Laboratory last week filed a plan of development with the city to tack on 100,000 square feet to its six-story, 112,000-square-foot new home that is under construction at the corner of Fifth and East Jackson streets in the Virginia Biotechnology Research Park.

The project, expected to cost about $24 million, will allow the company to accommodate 400 new employees that it plans to hire over the next two years, chief executive Tonya Mallory said.

“We’re popping at the seams right now,” Mallory said. “We will be in the new building in the first quarter of next year, and we’ve already filled it. So we are going to move ahead with the second phase, and we’ll be in there by 2014.”

HDL and its 607 employees currently occupy two buildings in park, the 76,000-square-foot Biotech 8 and Biotech 5. Biotech 5, at the corner of East Jackson Street and Navy Hill Drive, will be demolished to make way for HDL’s second phase.

Founded in 2009, HDL runs lab tests to detect various diseases and helps manage patients’ cases as a third party. It announced plans for its downtown expansion in November 2011 without a set timeline for the second phase.

Mallory said the push for the second phase is necessary to accommodate the company’s growth. The additional 400 employees will be hired before HDL cuts the ribbon on the second expansion.

The second phase is being financed by Fulton Bank and StellarOne Bank, Mallory said.

Demolition on the second site should start in March. Whiting-Turner is the general contractor, and the Lingerfelt Companies is the developer.

Lingerfelt Companies head Al Lingerfelt said this is one of the largest developments he’s worked on and the largest his company is working on currently.

“It’s great to have this in our portfolio,” Lingerfelt said. “The biotechnology space is an area we want to specialize in, and obviously HDL and the other tenants down there are high-quality users.”

Lingerfelt is also the developer on the first HDL building being built at the biotech park. The result will be a 212,000-square-foot expansion with a combined cost of about $75 million, Lingerfelt said.

Bob Skunda, chief executive of the Virginia Biotechnology Research Park, said companies like HDL are an example of why the biotech park was started in the 1990s.

“The whole reason the park was created was for economic development,” Skunda said. “I think the most important thing HDL has added to Richmond is those 600 jobs, and they are still growing.”

He said that once HDL’s two projects are complete, Biotech 8 would be 288,000 square feet.

Mayor Dwight Jones said the second phase of expansion was even larger than HDL had planned when his office announced it last year. The city is contributing a $1.35 million performance-based grant for HDL’s expansion.

“When we originally announced the HDL expansion in November of 2011, it was estimated that Phase 2 would include an additional capital investment of $30 million and the creation of 300 additional net new jobs,” Jones said in an email to BizSense. “True to form, HDL continues to outperform expectations and we are delighted that we are now looking at the addition of 400 new jobs when the second phase is completed.”

Mark Douglas, a broker with Cushman & Wakefield | Thalhimer, said HDL’s expansion could be enough to drive development in the Jackson Ward area.

“It’s almost starting to be a separate downtown,” Douglas said of the biotech park area. “What this is going to do is drive the need for more food, more hotel space, more parking, etc. They are doing great things over there.”

And stupid style just ran an article calling the bio tech park a failure. What a joke.

I’m repeatedly asked who the new employers are that are driving the demand for all the apartment construction in the City. Thank you BioTech Park for giving me one of the answers! Keep building!