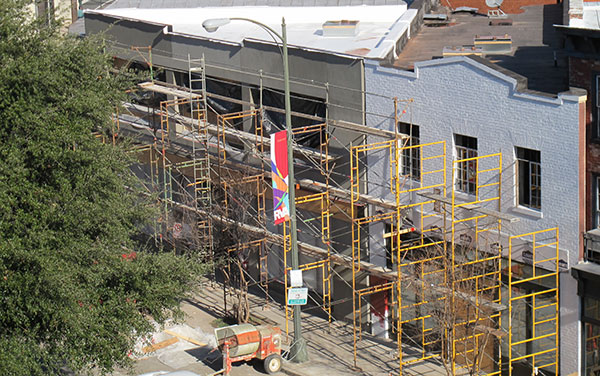 Ted Santerella is a busy guy: He sired both a son and a new restaurant concept this year.

Santarella, owner of Tarrant’s Cafe at the corner of West Broad and Foushee streets, is planning a second restaurant across the street in Jackson Ward. The restaurant will have a Belgian theme and is tentatively called Max’s Tavern after his son, Max. The restaurant is on track for a May opening.

“It’s going to be a more approachable Can Can,” Santarella said, referring to Can Can Brasserie in Carytown. “It’s not going to have all the French words and won’t be all French food. We’ll have 20 different Belgian beers on tap. We’ll have a large seafood menu and a raw bar.”

Santarella, 55, bought the buildings at 305 and 307 Brook Road, two storefronts that run diagonal to Adams Street and West Broad. He paid $199,000 for the properties and closed in February.

Renovation will run up to about $1 million, Santarella said, and will result in a roughly 2,000-square-foot restaurant.

Tarrant’s has been in business for six years. Santarella, a New York native, has been in the restaurant business his entire career.

Santeralla said that he’s still working out menu details but that he’ll be serving Beligian favorites such as mussels and, of course, waffles, both savory and sweet. Tarrant’s customers, in the meantime, can expect to play guinea pig for some of the new restaurant’s menu items in the form of specials.

Although $1 million is a hefty price for a new restaurant in Richmond, Santarella said he’s confident it will be successful.

“It will work,” he said. “When I opened Tarrant’s, I was doing like five customers a day, and I was making money. Now we’re doing 3,500 people per week. This one is going to be a little different. We’re coming out with guns blazing.”

Ted, congratulations on this story, with many more to come!
Looking forward to new adventures,and a happy and very prosperous new year for all of us!!!