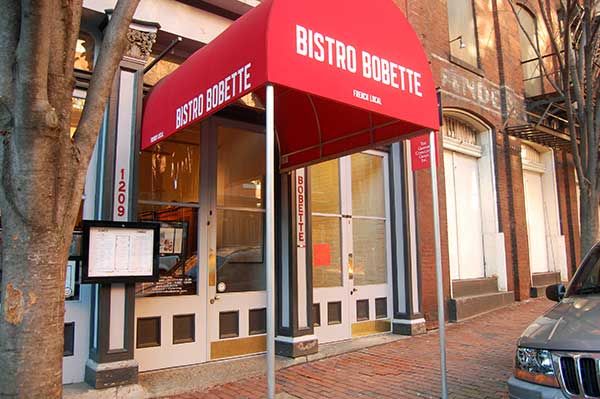 Bistro Bobette is set to double in size with a basement expansion. (Photo by Lena Price)

Wine will soon be flowing below the streets of Shockoe Slip.

French restaurant Bistro Bobette plans to convert the basement level of its East Cary Street building into a cellar wine shop and venue for private parties.

The new space will allow customers to pick up bottles of wine to go and will give co-owners Wendy Kalif and her husband and head chef Francis Devilliers room to hold events without crowding into the restaurant’s space.

Kalif said the bistro gets more requests for events such as wedding rehearsals and engagement parties than it can handle.

“We don’t do many [events] right now, because we don’t like to alienate our clientele,” Kalif said. “Plenty of people come in three, four times a week, and we hate to turn them away. So we wanted to address that need for a private space.”

Kalif said she expects construction to take several months, but she’s shooting for a spring opening. Once it’s done, the new space will have its own entrance.

Originally called Bouchon, the restaurant opened in 2009 at 1209 E. Cary St. It changed its name to Bistro Bobette in late 2010.

The addition would double the size of the 1,100-square-foot restaurant. Kalif would not comment on the cost of the expansion.

The new space will be versatile, Kalif said, and the restaurant might use it for wine tastings and cooking demonstrations.

“If it’s a group of 12 businessmen who want steak, we can do that,” Kalif said. “If it’s a bridal party, we can do something a little different to accommodate them. We’ll have something for everyone.”