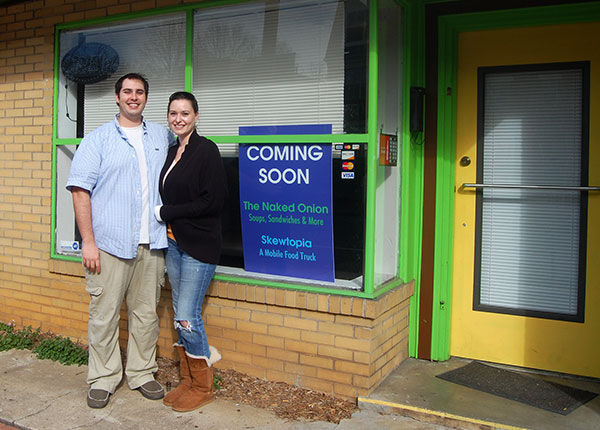 Greg Comstock, left, and Lauren Jurk of the Naked Onion and Skewtopia. (Photo by Lena Price)

Two Las Vegas chefs are unleashing a culinary one-two punch on the Fan.

Lauren Jurk and Greg Comstock are about to launch the Naked Onion, a sandwich shop, and Skewtopia, its food-truck sister operation.

Both should be up and running by the end of January.

Comstock said the pair stumbled upon the former Ingrid’s Bakery location at 2118 W. Cary St. in their search for a workspace to prep food for Skewtopia. They decided to lease the former bakery’s spot.

“We originally just wanted to start a food truck,” said Comstock, 30. “We found this space, and it was already zoned for takeout. It seemed like a good fit.”

Ingrid’s Bakery closed in fall 2012, and the space was used during election season as an Obama campaign post.

Jurk and Comstock have about 30 years of culinary experience between them. They both cut their teeth in high-end Las Vegas restaurants, working for such chefs as Bobby Flay, Wolfgang Puck and Alessandro Stratta.

Comstock is a Richmond native who started his career at Short Pump’s Patina Grill, and Jurk worked most recently at the Hard Shell in Shockoe Slip.

“We’re going to put a lot of emphasis on products made from scratch,” Jurk said. “The menu’s going to change from season to season.”

The pair invested about $40,000 out of pocket in the startup. Comstock said they cut down on costs by tackling most of the renovation themselves.

“You have to wear a lot of different hats,” Comstock said, “to go from cooking to painting to carpentry to bookwork.”

Awesome! What a great addition to Richmond’s food scene!

So excited for these two! Richmond needs more young entrepreneurs that are competitive in the restaurant scene!! Less bars and more real food! Many blessings and much success!

I couldn’t be more proud. These two graduated from le Cordon Bleu in Las Vegas and are so talented and gifted in their creative and delicious combinations. It’s not just the mom talking, it’s coming from anyone who has been fortunate enough to taste their amazing food. Best wishes and ENJOY! Las Vegas Mom