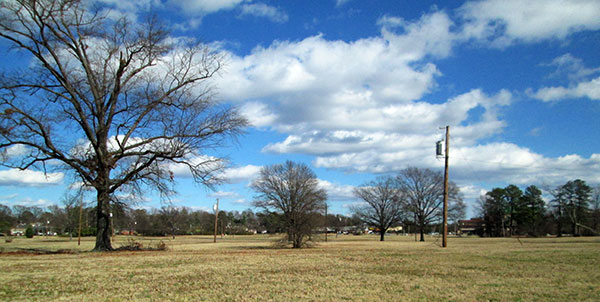 The site of the planned Staples Mill Center. (Photo by Michael Schwartz)

A massive, long-dormant development near Staples Mill Road and Libbie Avenue is back on track.

Gumenick Properties plans to break ground in the fall on an 80-acre mixed-use development, known for now as Staples Mill Center, after announcing Thursday that it had landed a commercial anchor tenant for the project.

Southern Season, a high-end grocery store based in North Carolina, is slated to move into 50,000 square feet on the southeastern side of the development, which is bound by Bethlehem Road, Staples Mill Road and Libbie Avenue. The store should be up and running by mid-2014, said Wayne Chasen, head of Gumenick Properties.

“Southern Season had identified 10 southern cities they wanted to expand to, and Richmond was one,” Chasen said. “They looked at a number of sites, but ultimately they liked this one because of its proximity to [Interstate] 64.”

The property has sat vacant for at least 10 years since Gumenick razed the apartment complex that had been there. The development project was put on hold because of the economic slowdown.

A previous estimate for the development, which will take the best part of 10 years to complete, put the cost at $434 million. But Chasen said that number was a pre-recession estimate and was probably no longer accurate.

The Southern Season store will be the second major tenant to land in Staples Mill Center.

In June, Gumenick signed a deal to build a three-story, 50,000-square-foot public library for Henrico County on the property.

Along with the announcement of the Southern Season location, Chasen said Gumenick is planning to develop a second 40,000-square-foot, two-story retail strip with office on the second floor where the developer would move its headquarters.

Chasen would not say when work would begin on the residential portion of the development.

“I can’t say a quarter or a year, but, with things aligning the way they are, I expect it will be soon,” Chasen said.

Gumenick has been on the go in the past year. In April, the developer was moving ahead with a 12-unit condo building and community center in its Monument Square development near Willow Lawn Drive and West Broad Street.

The company is also developing the Grayson Hill property at North Gaskins Road and Patterson Avenue.

Southern Season signed a 20-year lease on the new property, Chasen said, with multiple options. Barry Hofheimer and Alex Hamilton, both brokers with CBRE, represented the grocery store in the deal.

The Chapel Hill-based store is in the midst of a major expansion. Its original store was family-owned and opened in 1975. In 2011, it was purchased by a private equity fund, TC Capital Fund, made up of Carrboro Capital and Tryon Capital, from the same area of North Carolina.

Clay Hamner, head of Carrboro Capital, said the Richmond store would cost about $10 million to develop and is part of a $100 million-plus expansion to 10 cities across the South.

Once all the stores are open, Hamner expects Southern Season to generate about $450 million in revenue annually.

“We expect each store to do between $25 million and $40 million in sales each year,” he said.

“About 10 to 15 percent of our products are local offerings,” he said. “We work very hard to find small vendors with a unique product but no outlet. And typically, if they do well with us, they can get picked up by other high-end grocers like Whole Foods and stores like that.”

The Richmond store will have 10 departments, including a bakery, restaurant, coffee bar, ice cream bar and cheese shop.

Why on earth would you put a high end grocery store in that area?

Jay
Reply to  Will

Well, I imagine the eventual 2100 housing units will probably not be low income; they will likely be solidly middle-class.

Not to mention it will be in a fairly accessible location.

I imagine they’re betting the store will be a ‘destination’ grocer of sorts. Similar to the way that people travel all the way to Short Pump just to go to Whole Foods and Trader Joes.

Scott
Reply to  Will

Not to mention it will be easily accesible from Libbie, which leads to one of the wealthiest part of the region.

Will
Reply to  Scott

I’m sure that is the thought process but I think they are just far enough off the beaten path of the near west end to draw the libbie/grove crowd. If it were my money I would either put it in short pump or preferably the libbie/grove/patterson area.

I’m curious – does anyone know what had been on that property and/or when?

The Suburban Apartments were there for years and years.

I’m glad to see that they’re moving forward on this project but I really hope it doesn’t look like West Broad village. We don’t need any more failed attempts (aesthetically) at trying to create new “cities.” At least the developer is local and will have a better appreciation for what would look nice and appropriate for Richmond.

@ Will – Their prime target will be everyone within the perimeter of Broad-Malvern-Cary-Libbie.

@ Jim – I believe there was a low income apartment complex on that site. My father worked for Heilig Meyers when their HQ was across the street, and he told me that the police would be called over there constantly.

Thanks for the background. Even today, the property has a strange and eerie look. This will surely bring new life to that area!

This is one of the best specialty grocers I’ve ever seen. It will be a real asset to Richmond, and because of the highway system, it promises to attract a huge trade area.

This is not a grocery store. It does not sell produce. As the owner’s say they don’t sell eggs or milk. This place is more specialized than a Fresh Market crossed with Cracker Barrell store. It should do well as it will be close to high end housing and office along with I-64 access. Their restaurant is the big draw for them.

We are very fortunate to be in the first wave of Southern Season’s expansion strategy. A 20 year lease shows quite a commitment.

These people are investing real money into our city and creating real jobs. Let’s thank them and welcome them.

You build something bad people complain, you build something nice, people complain. This is going to be an amazing development for Richmond. I’ve seen the renderings. Gumenick builds nothing but first class communities. You may not see it now, but soon everyone will be scrambling to near this bright new corner of Richmond. Kudos to them for being ahead of the curve. Long live mixed-use development.

When I opened the T-D on Friday, February 1 I was greeted to the best good news story in a long time. Southern Season was coming to RVA! My daughters are in school in Chapel Hill, and I always make a point to stop and shop there. The wine department is extensive, especially the French wine selection, and the staff was knowledgeable. Although I had no reason to buy the prepared foods in Chapel HIll, I plan to try them here because they looked delicious and fresh. Those who LOVE to cook and entertain will be impressed with the cooking… Read more »