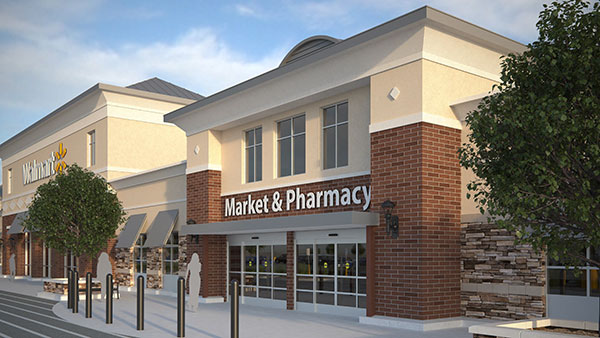 A rendering of the Walmart planned for Reynolds Crossing. (Courtesy of CBRE)

It’s a done deal: Wal-Mart is coming to Reynolds Crossing.

Robert Reynolds, a principal at Reynolds Development, said Wal-Mart plans to break ground on the 90,000-square-foot store in April to be ready for a spring 2014 opening.

Reynolds said that his company is working on plans for the surrounding retail.

“We’re in the process of doing the conceptual development now,” Reynolds said. “We’re probably looking at 50,000 to 60,000 square feet of small, supporting retail, but the market will determine that.”

CBRE brokers David Crawford and Martin Blum will represent the developers in leasing the property.

Henrico County green-lighted the project in September after months of haggling with the surrounding neighborhoods.

What kind of retail supports walmart? Isn’t that the point of walmart?

It wasnt haggling. It was making Reynolds stick to the proffers that they originally agreed to.

I wish Wal-Mart would just go down the street and turn that blight (formerly known as K-Mart) into something that resembles the rendering above.

Yeah, I agree. That would have made much more sense.

Agree with Steve 100%. I’m guessing the timing probably didn’t work out so great between the negotiations on the new space vs. the closing of K-Mart.

I wish they had taken the K-mart space, too, but I suspect they didn’t want to be associated with them and their demise.

Unfortunately, this deal was already in the works prior to K-mart closing. Otherwise Walmart might have gone there.

Not sure how this is a great addition to one of the “power centers” in the region with a couple Fortune 500 companies around, but I guess even they need to buy stuff cheap.

Reynolds had the chance to do something really special here and opted for the quick buck instead. Oh well, maybe something better will come into the old K-mart site.

Still waiting on a WalMart for the East End here. Aren’t there like four WalMarts in that area already???

My thoughts exactly Garry. I mean there’s one on parham, brook rd, short pump….east end is where one is missing.
However, if one must going that area, Kmart’s old location makes the most sense,

Walmart is a net drain on locations it goes into.
It’s a major polluter.
It also pays such low wages that a large portion of it’s labor force is eligible for food stamps, so basically your tax dollars are being used to supplement the incomes of the richest family in America.
http://www.dailykos.com/story/2012/10/10/1141724/-Walmart-fuels-inequality-epidemic-taking-advantage-of-our-safety-net
I wish we could track the campaign contributions to the Henrico Board of superviosors; from what developer did money come, and could it possibly have affected votes for permits?
There is more money in building then retro fitting, thats why they are not using the old K-mart store.

Ed, your time to raise these issues was 5-6 years ago when the Charles Glen HOA starting fighting the rezoning for the Reynolds Property. And anybody who uses data from Daily Kos, a liberal think tank, to make a point will have their credibility severly discounted.

Great to hear that more jobs are upcoming! I was told by a current walmart employee to go directly to the site at Reynolds Crossing and they will have paper applications. Is this information correct?

When is this location scheduled to open?

Word on the street is that this Walmart is actually scaring off other potential tenants for this development…what’s that saying about sleeping with dogs?

Someone made this comment awhile back …..Could we please just get a Wal-Mart out near the Varina area. There is NOT 1 Wal-Mart on the whole eastend of Henrico but there is like 4 on the westend of Henrico,. Come on now, theres something wrong with that picture. Not to mention it seems those who live on that side are getting a little upset with all the extra traffic and congestion now.