A VCU graduate launched his startup armed only with a pair of pliers and 10,000 discarded bottle caps.

Josh Stolberg started RVA CapWorks in February. He uses tin snips and a metal press to sculpt beer and soda caps into flowers, stars, birds, signs and anything else his clients can think of. 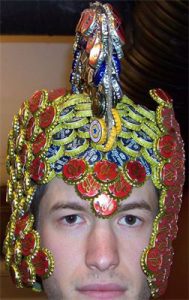 “I won’t go so far as to say I can make anything out of bottle caps,” Stolberg said, “but there’s nothing I won’t try.”

Stolberg, 28, sells his work online, and he’s started setting up shop at the Carytown Farmers Market and several local food truck courts. He pitches his RVA CapWorks stand next to Super Fresh Carts, a sandwich and s’mores food truck operated by a friend.

He’s also assembled custom pieces for a few local businesses. GrowRVA, which operates the South of the James Market, commissioned a 200-cap replica of the company’s logo in March. A flower made out of caps from Hardywood Park Craft Brewery’s Singel beer is on display at the brewery.

“A lot of people ask me if I drink all the beer myself,” Stolberg said. “Fortunately, I have a lot of volunteers for that.”

He has recruited a network of friends and family members to supply the new business with about 200 caps a week. Stolberg said he also collects caps from Bernie’s Subs and Fan restaurant Selba.

“As demand starts to pick up, I’ll start making the rounds at more local restaurants and bars,” Stolberg said.

The finished products range from $8 for a six-cap piece to $24 for a more intricate sculpture. Stolberg said the prices for custom pieces vary based on the time and the number of caps required.

Stolberg said he plans to tap into the area’s craft beer boom to help grow the business.

“I think there’s something about seeing your favorite beer turned into a piece of art that people just enjoy,” Stolberg said. “I’m already getting requests for specific breweries. Someone came up to me this weekend and asked for a piece made just out of Dogfish Head caps.”

He said it takes about a minute to remove the lining and flatten one cap. He assembles the caps using a metal press that can apply one ton of pressure.

“I didn’t want to use glue or any other type of adhesive,” Stolberg said. “That’s where my engineering background kicked in.”

Stolberg, who works full-time for power company Alstom, said he spends about 30 hours on the weekends flattening and assembling the pieces.

Stolberg started developing the idea for the company about two years ago. He constructed a Halloween gladiator costume using 3,200 caps. The 17-pound costume took 250 hours to make.

For now, Stolberg works out of his Oregon Hill home. He said that if demand picks up he would look for a separate work area and a place to sell the sculptures.

I want one! What fun.

Who would have ever thought this could be a business? But if you’ve ever been to a house of Blues you will see how incredible and energetic bottle cap art can be.

Josh – I ran next to you at the 10k and could not help but smile when looking at your creative recycling. Bravo and good luck moving forward. You have inherited talent from both your Mom and Dad!

Waaaay cool. Love the creativity. I can contribute to the collection, Josh, and will even donate my current collection.

Hi Lena,
Great article! Thanks for the publicity. I posted a link on my website and Facebook page.

Go Josh! This is great. We need a VCU GOLD design. Of course we will reciprocate by finding you as many bottle caps as you need in the future.