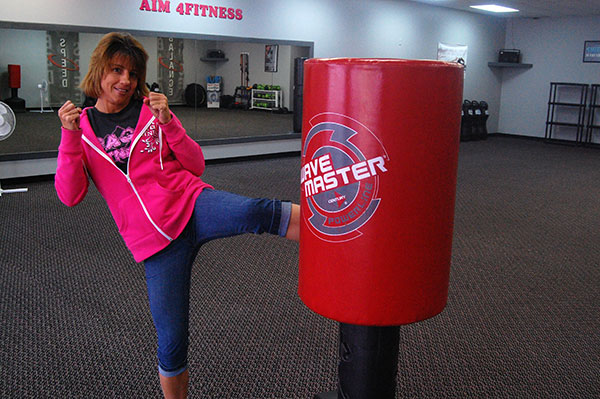 A kickboxing gym for women now has some extra space for taking out aggression.

“We have twice the space we did at our last location, and it still seems too small,” owner Kathy Mullins said. 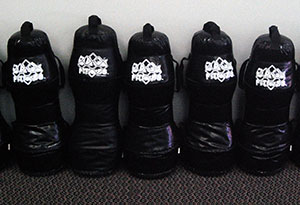 Aim 4Fitness has 110 full-time members and plenty of punching bags to go around.

She said the extra space would help her accommodate the studio’s growing customer base. At last count, she had 110 full-time members and almost 300 women taking classes on a trial basis.

Membership packages start at $65 a month for 12 classes. Mullins declined to comment on startup costs for the business but said she financed the operation out of pocket.

Mullins said she wanted to create a space where women can feel comfortable while working out. She offers one class for men and plans to launch an evening co-ed class this year.

None of her classes, which involve sets of punches, kicks and other cardio, use person-to-person contact. But the punching bags aren’t so lucky.

“I do have people tell me they picture faces on the bags,” Mullins said. “It’s a good way to relieve stress and take out any aggression.”

Mullins is the only full-time trainer in the studio at 13534 Waterford Place, and she teaches four to five classes a day, seven days a week.

Customers have to be at least 13 to take a class, but Mullins said she works with women from their early 20s up to their 60s.

“I’ll have women in their 50s or 60s come in who might be worried about injuring muscles or knees,” Mullins said. “We modify the routine so it works for everyone.”

Mullins broke into the kickboxing arena about four years ago. After losing 65 pounds in six months, she started teaching part-time.

She launched Aim 4Fitness in March 2012 and started teaching evening and weekend classes at 6144 Brad McNeer Parkway. When she got laid off from her full-time job as an accountant, she expanded her business hours to compensate.

“After I lost my job, I started offering day classes,” Mullins said. “I had to do whatever I could to bring in a paycheck. It let me focus on this full time.”

Another Midlothian kickboxing facility called 9Round is set to open in May.