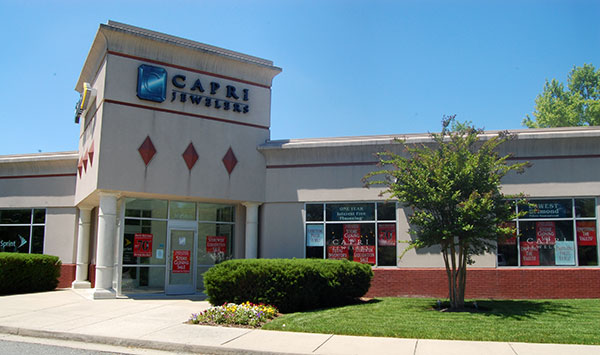 Capri Jewelers will close its location at 10069 Brook Road. (Photo by Lena Price)

A longstanding local jeweler is about to say goodbye to Glen Allen.

Capri Jewelers, which opened its first shop on Lakeside Avenue about 30 years ago, announced recently that it would shut down its store near the Virginia Center Commons mall this year.

The company decided to close the Glen Allen location to consolidate its inventory into one location, said Capri marketing director Anna Elko. The Capri Jewelers at 11525 W. Broad St. in Short Pump Crossing will remain open.

“Short Pump has been our headquarters for many years, and it’s the nucleus of where most of our business comes from,” Elko said. “We think with one central location, we’ll be able to better serve our clientele.”

Capri Jewelers has been in the Virginia Center Commons storefront at 10069 Brook Road since 1999. The company owns the 3,900-square-foot property, which is for sale.

The consolidation has been in the works for more than a year, Elko said. She said Christopher DeCapri, the late founder of Capri Jewelers, planned to close the Glen Allen store at the beginning of 2013. DeCapri died in February.

Elko declined to share revenue figures for either of the stores but said she expects most of the company’s regular Glen Allen customers to shift to the Short Pump store.

“Looking at the numbers, it makes sense for us to do this,” Elko said.

The company hasn’t set a closing date for the Brook Road location, but Elko said the store is running a consolidation sale until the end of June. Most of the stock will be up to 70 percent off.

Elko said that the company has 14 employees and that everyone who works at the Glen Allen location will relocate to Short Pump.