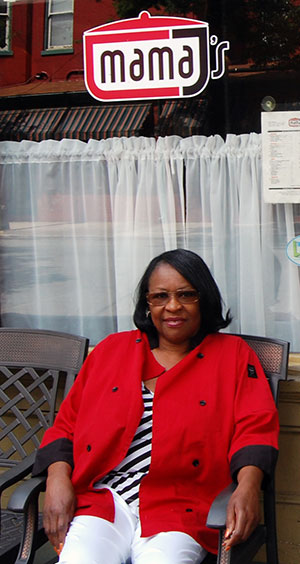 A Jackson Ward restaurant is set to give the neighborhood a new way to get its comfort food fix.

Mama J’s Kitchen is converting the building next door to its home at 415 N. First St. into a venue for private events. Owner Velma Johnson said the extra space should allow the four-year-old eatery to keep up with customer demand.

“We have people calling in asking to rent out the restaurant for private parties,” Johnson said. “We don’t want to turn away our regular customers, especially on Friday and Saturday nights. This should help.”

Once it’s done, the event space will have its own kitchen and cater to birthday parties, wedding showers and bigger customer groups. She said she’s shooting for a June opening.

“This used to be a department store, and we had to completely gut the space,” Johnson said. “But things are going to start moving fast now.”

The 900-square-foot event space at the corner of Clay and First streets will seat 49 people, Johnson said. She declined to comment on how much the expansion would cost.

When the new space isn’t rented out, the restaurant will use it to hold in-house events such as brunches, said general manager Kelli Lemon.

“We’re not expanding the restaurant,” Lemon said. “It’s always been like eating in someone’s house, and we don’t want to lose that intimate feeling.”

Johnson, a Richmond native, spent 17 years as a deputy sheriff before getting her catering license. She opened Mama J’s in 2009.

The restaurant and catering company has a staff of about 30 people, but Johnson said she still spends most of her time in the kitchen.

“My recipes are all in my head,” Johnson said. “That’s how my grandmother cooked, and that’s how I cook. We aren’t looking to expand or franchise. We just want to keep serving people here in Jackson Ward.”

That’s great news! I haven’t been to the restaurant yet, but I have heard great things. It’s always great to see local businesses thrive.

Mama J’s is WONDERFUL. Great food, super-nice staff. You really walk out with a case of the warm fuzzies. I’m thrilled that they are expanding!

What makes Mamma J’s is the food and Ms. Johnson. Great news!!