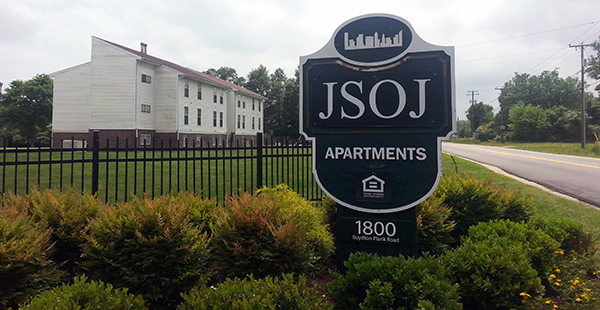 The 14.7-acre Jefferson South of the James development in Petersburg. (Photo by David Larter)

A 200-unit foreclosed apartment complex is up for sale by its lender.

The Virginia Housing Development Authority is marketing the 14.7-acre Jefferson South of the James development at 1800 Boydton Plank Road in Petersburg for $2.5 million.

“The property was developed in the 1970s by Fralin & Waldron as Section 8 housing,” said Mike Stoneman, an asset manager with VHDA. “We didn’t become involved in the property until about 13 years ago, when it was developed as a low income tax credit project.”

VHDA foreclosed on the property Feb. 29, 2012, according to Petersburg records, at a transfer price of $3.5 million.

According to VHDA records, the developer that received low income housing tax credits on the property was L.S. Jefferson Properties, Inc. The tax credits were issued in 1999, the records show.

The company that controlled the property was Jefferson South of the James LP, according to the Petersburg assessor’s office.

An ad for the property shows that the apartments are about 45 percent occupied, which Stoneman attributes to poor maintenance.

“Since we took over the property, we’ve taken about 80 apartments offline due to deferred maintenance issues,” he said.

Stoneman said that the lender is looking for an all-cash buyer for the property and that VHDA will have no more involvement in the property after it is transferred.

Petersburg records show the property, located off Interstate 85, was developed in 1974 and is assessed at $4.35 million.