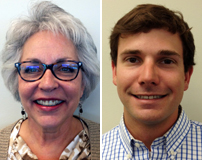 Gail Waters joined as an accounts receivable associate. She was previously with the Jackson Company.

Carter Marchant has been promoted to general manager of the Richmond Marriott West. Marchant attended Virginia Tech and spent five years as director of sales and marketing for the hotel.

Mark B. Sisisky joined Heritage Wealth Advisors. He was previously a director for Xenith Bank and Virginia Life Sciences and a wholesaler for Anheuser Busch. He is a trustee for the Community Foundation of Central Virginia.

Patrick J. Long joined as a managing director. He previously spent 13 years at Keefe, Bruyette & Woods. He attended the U.S. Naval Academy and the University of Chicago.

Brian D. Branson was promoted to managing director. He has been with the firm since 2010 and previously spent six years with Sandler O’Neill + Partners.

Susan Nash joined George Mason Mortgage as operations manager for its new Richmond and Virginia Beach operations. She was most recently with RBS Citizens and Chase Mortgage.

Betty Caylor has been promoted to vice president. She has 27 years of industry experience.

Jamie Lee Chafin has been promoted to assistant vice president. He has been in the industry for 15 years.

Marianne Weddington has been promoted to vice president. Marianne has been with the firm for four years and in the industry for 16 years.

John King has been promoted to assistant vice president. He has been with the firm for nine years.

Ken Hammond joined as customer engagement manager. Hammond co-founded getloaded.com and has led marketing campaigns for Capital One and Jacuzzi.

Juliette Oliva joined as marketing e­commerce manager. She has eight years of graphic design and marketing experience and has worked with such clients as Southern States and LaDifference.

Kathleen Whitlow joined as marketing channels manager. She’s worked with such companies as Capital One, NetSearch Direct and the Leukemia and Lymphoma Society.