Boasting a bevy of bow ties, a team of Hampden-Sydney graduates is trying to move further into the Richmond retail scene.

Collared Greens, a North Carolina-based men’s apparel company, is setting up shop in a 900-square-foot storefront at 5707 Grove Ave., near the corner of Libbie and Grove avenues. It will be the five-year-old brand’s first company-owned store. 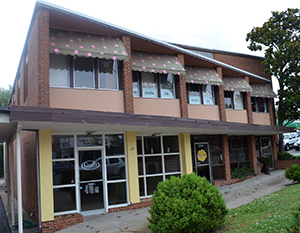 Founded by four Hampden-Sydney alumni, the six-person company has previously sold its bow ties, neckties, cummerbunds and polo shirts through its site online and via wholesale to more than 200 retailers across the U.S.

“We’re making stuff for people like ourselves,” said Mason Antrim, Collared Greens’ chief operating officer and a Richmond native. “We wouldn’t put out something that we wouldn’t wear.”

Two of the company’s four co-founders are Richmond natives.

On its website, Collared Greens charges $55 for bow ties, $85 for neckties and $75 for polo shirts. The company also carries T-shirts, belts, hats and visors.

The company works with manufacturers in New York, Kentucky and Connecticut. All of its clothing is American-made, Antrim said, because the company wants to help keep manufacturing jobs stateside.

“More people are trying to find out where their clothing is sourced from,” said Antrim, 30. “We try our best to be transparent about that.”

The company is working with the Hodges Partnership to bolster its reach in the area.

The company signed a one-year lease for the space on Grove Avenue. Antrim declined to say how much the company is spending to get the shop up and running. He said the store is expected to open in mid-July.

Good luck guys! This should be a huge hit!! Make sure you have good signage…

Very encouraging. Can’t wait to check the storefront out. Congratulations and Welcome!