When the workweek ends every Friday, business heats up at a Midlothian warehouse.

That’s when an army of camo-clad, gun-toting teens with nicknames like “Grizz,” “Cozak” and “Maverick” arrive for battle.

They duck behind hay bales, sandbags and even a retired ambulance inside the dark warehouse, dodging and returning fire amid a hail of plastic BBs.

The thumping of boots on the concrete floor, the pop and hiss of rifle fire and the deafening, 130-decibel blast of occasional airsoft grenades – which detonate at about $3 a pop – are music to the ears of Bill Garrahan and Mary Ellen Robards, owners of Tactical Response Unleashed.

Garrahan and Robards this year launched the 17,500-square-foot defense training and entertainment facility at 3701 Hendricks Road with the goal of making police training more realistic: At TRU’s airsoft firing range, the targets shoot back. 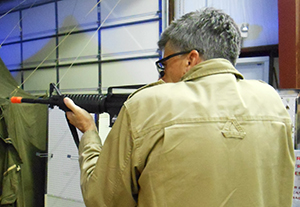 “It’s a very dynamic environment,” said Garrahan, 57, who volunteers about 900 hours a year as an auxiliary member of the Chesterfield County Police Department. “If you can train in an environment when you have that kind of heart rate elevation and fear coming at you, then you can learn to control your heart rate.”

That adrenaline rush has proven addictive for civilians, too, who now account for 75 percent of TRU’s business.

Paul Pendergrass, 40, an airsoft player and competition shooter, brings his son to TRU most every Friday night.

“My son’s fallen in love with this,” he said. “He gets off the bus and he’s ready to run straight into his room, get his airsoft stuff on, he’s ready to go.”

Garrahan, who also owns Virginia Water Systems, said he has about $500,000 invested in the six month-old business. He paid for startup costs using personal assets and a loan from his family, which also helped inspire the concept.

“I grew up with stories about my Uncle Leo,” a police officer who was killed in the line of duty, he said. “I always wanted to be a policeman.”

When a high school classmate’s daughter was killed in the 2007 Virginia Tech shootings, Garrahan, who graduated from Tech, decided to take action.

“I promised that I was going to do something to honor her memory for the rest of my life,” he said.

TRU began by offering tactical training, which includes simulations of scenarios such as hostage situations and armed robberies. The company opened with a Groupon that Garrahan said was popular but did little to create consistent business.

“Every Saturday and Sunday we were booked, but we weren’t making any money out of it,” he said. 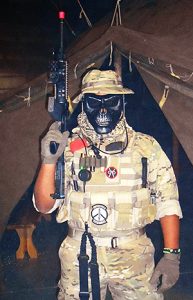 At the suggestion of his employees – TRU has about 10 workers – Garrahan in February added public closed-quarters airsoft battles, or CQB, to the company’s offerings. The weekend battles were so popular that Garrahan has held them every weekend since March. The five-hour sessions cost $20 for players with their own gear and $35 for those who rent their equipment.

Playing airsoft is fun for the two, but Airsoft Grandpa said he wants Nick to learn about safety, too.

“I want my grandson to learn what guns are really made for,” he said.

To that end, Garrahan also offers gun-handling classes with the goal of training “sheepdogs,” or civilians who can skillfully use force to protect unarmed, law-abiding citizens (sheep) from people who attack them (wolves).

The gun business has been booming in Virginia as of late. Statewide gun sales reached an all-time high last year and recorded a 79 percent year-over-year increase in December in the wake of the Newtown, Conn., school shooting.

“When the sheepdog hears about the latest tragic shooting, they know in their heart had they been there, things would have turned out differently because they were prepared,” he said.