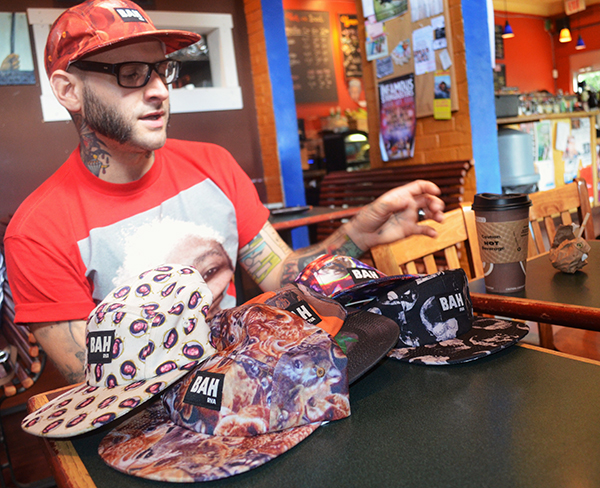 Neil Thomas doesn’t care what people call his hats, as long as they’re buying them from his seven-month-old startup.

Thomas, 30, designs five-panel caps under the BAH-RVA brand from his Oregon Hill home. The Manchester, England, native works part-time at Rumors Boutique thrift shop and designs the custom caps in his spare time.

“I saw people wearing hats I liked but that I thought could be better,” Thomas said. “I would try to look for a better version of those hats and couldn’t find them, so I thought, I’ll just make my own.”

“I was worried, but I was also confident in what I had. I realized if I sold X amount of hats, I could make my money back,” he said.

Although Thomas says the “BAH” doesn’t stand for anything, the RVA part of the name has come in handy.

“I wanted people to know it was something a bit more local, so they knew they weren’t just buying something that was a million times removed from where they bought it,” he said. “If they buy it from Rumors or West Coast Kix, they know they’re buying it from a dude who lives in Oregon Hill and works in Richmond.”

Thomas said he saw that five-panel caps – named for the five panels of fabric used to make them – were growing in popularity.

He began designing patterns and researching manufacturers, settling on a California factory.

His first design, which featured an image of rapper and producer Dr. Dre, sold out.

Thomas’s caps are more square than a baseball cap and are made of polyester and cotton. He said he prefers the style because of the flat panel on the front.

“As a designer, it gives you much more flexibility with what you can do,” he said.

Thomas moved to Richmond this year to marry his then-fiancée.

He says he passed on college to work in the fashion merchandising industry in England and has worked at a skate shop and nightclubs and managed a record label.

The next shipment of 250 caps with five new patterns will likely arrive in late July or early August, Thomas said. Still, he doesn’t plan to quit his day job.

“It would be great if it was my main money-making thing,” he said. “But I really just want longevity and for them to be recognized as synonymous with Richmond fashion.”

Can’t wait to see what comes out in July!