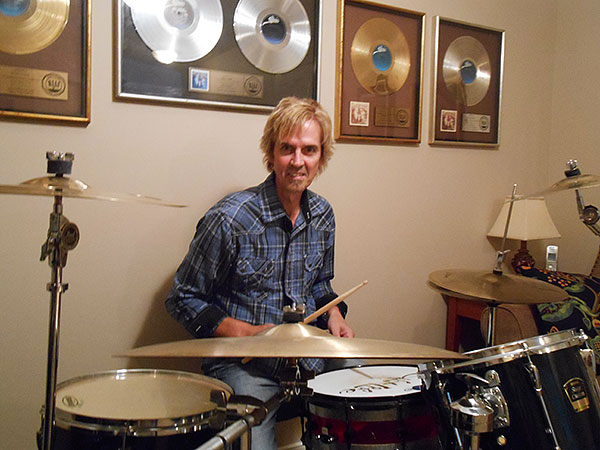 Three platinum albums later, Crump, 55, has settled into suburban Richmond. He’s a drummer in his church’s praise choir and plays with a few local bands. After stints in real estate and web design, Crump has gone into business teaching his craft to aspiring musicians, at $30 per half-hour lesson and $40 for an hour-long session.

BizSense caught up with Crump at his Midlothian home, where he plays with two platinum records on the wall behind him. His teaching outfit – Drum Lessons by Bruce – is taking new students, and although the music business is drastically different from when he started out, Crump isn’t ready to give it up quite yet.

Below is an edited transcript of the interview.

Richmond BizSense: After 35 years of recording and touring as a professional musician, what sticks out in your mind from your career?

Bruce Crump: The Nuremburg, Germany, show with the Who was really a standout. That one’s easy, because you don’t really play for 150,000 people very often. It was a big open air thing in Germany. I heard they stopped counting at 150,000. Rumor has it that there were quite a few more.

RBS: How did you get your start in music?

BC: I grew up most of my life down in between Jacksonville and St. Augustine, Florida. And that’s where I ran into the Molly Hatchet guys somewhere around late 1975. I was a senior in high school. A few months over that summer I worked any job I possibly could to buy a set of drums.

Somebody told me about Molly Hatchet, so I snuck out one night to see them. And then through some mutual friends I heard that their drummer was leaving, so I contacted one of the members to see if that was true, and he said, “Yeah, we pretty much don’t have a band.”

RBS: How did a band like Molly Hatchet make a name for themselves in the ’70s and ’80s?

BC: It all has to come together. That’s why we were successful, I believe. We had this triple threat between management, record company and booking agency, and the three of them worked really well together to get enough money behind us to put us on the road and then the right agency to put us with the right bands to get us in front of the right number of people.

We’d play a club, a record company executive would fly in and listen to the band, and it would be a “thumbs up” or a “thumbs down.” At that time it was mostly “thumbs down.” Then the most unfortunate thing happened. The Lynyrd Skynyrd plane went down. Looking back on that, it opened up a door for our career, but at the same time – talk about the true definition of bittersweet in that some of our friends were no longer, the band was no longer, so obviously there was a void.

RBS: It’s been about 20 years since Molly Hatchet broke up. How have you paid the bills in the meantime?

BC: Music has always been what has sustained me, financially. I did get into real estate briefly. Back in July of 2003 I got my real estate license. A month later, I was diagnosed with throat cancer, so that kind of derailed my whole real estate career, at least for a couple of years, because after the treatments from the throat cancer there were some side effects that I am actually still dealing with today.

Music is what I’ve done since I went straight out of high school. I’ve done some odds and ends along the way. My former brother-in-law is a web design genius. I worked with him for a while, found out that wasn’t really for me. Between drum lessons and playing around in local bands, that pretty much sustains me.

RBS: How did Drum Lessons by Bruce come about?

BC: Someone came up to me after church one Sunday and said “I have a 12-year-old son who’s just starting to play the drums. Someone told me about your musical history, about the Molly Hatchet thing.” And she said, “Do you teach?” And I looked at her for a second and said, “As a matter of a fact, I do.” Of course I’d never even considered it, but I knew that with 35-plus years of playing the drums I’d picked up something along the way that I could certainly pass on.

My first lesson was probably two years ago. And then it kind of snowballed from there, because once I got into it, I realized how much I really liked it. I’m up between eight to 10 students during the day Monday through Friday. I’d like to see what it would be like to get 14, something like that. If I did three a day, five days a week, that’s 15, I think that would be really good.

RBS: With your musical ventures in town, do you ever see yourself recording again?

BC: I’m not ready to throw in the towel, so to speak. I have some friends down outside of Atlanta who have contacted me about putting a project together, and these are guys who come from other bands from that same era as Molly Hatchet.

RBS: It’s been a few decades since Molly Hatchet broke through. How would you promote yourself differently with a new project?

BC: The Internet is a great tool with all the social networking that’s out there. Facebook is huge. There’s a music website, ReverbNation, where if you record a song you can upload it and promote it that way. ITunes is huge; they have certain guidelines that you have to qualify for to have your songs available. I’m not sure what those are, but I imagine it has a lot to do with the quality of the material and also who the band members are.

I think that’s where this project that I’m talking about in Atlanta may have a little bit of an advantage, because we all have 35-plus years of experience in the music business. So it’s not like we’re a garage band trying to throw something out there on iTunes and hope somebody listens to it.