A rendering of the planned headquarters. [Click to enlarge]

A local auction company is getting a new home base.

Motley’s Auction & Realty Group plans to break ground in July on a $4 million headquarters. It will build the 30,000 square-foot facility on 38 acres in south Richmond, according to president Mark Motley.

The building will be on the site of the Motley’s auto auction facility, across Interstate 95 from Philip Morris and recognizable by the Motley’s big-rig truck in the sky. 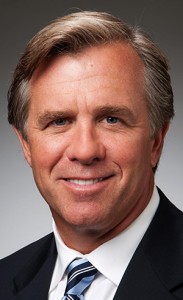 Motley said consolidating the branches is ideal for “efficiency and everything being under one roof so we can better utilize our staff.”

“We’ve outgrown two of the spaces right now,” he said. “We’re going through some growing pains.”

“It’s something we’re all very proud of, and I couldn’t have done it without the staff and our clients that we sell for and also the customers,” he said. “It is a tremendous milestone, but I don’t for a second want to take the all the credit.”

The company has owned the 38-acre site at 3600 Deep Water Terminal Road since 2006. Construction will begin in late July.

The company’s industrial park office on the site will be demolished. Part of the existing auto auction building will be repurposed into a vehicle reconditioning facility. The rest of it will be leased, he said.

Motley’s is working with Richmond-based Century Construction and Landfall Construction on the new headquarters. It’s financing the project through a local bank, but Motley would not name the lender.

Jack Shady of Freeman & Morgan Architects designed the building, which will include training facilities, a telemarketing center, a marketing and graphics department, a customer service center and a cafe.

The new headquarters will expand the auto auction from four lanes to seven, which could increase the number of vehicles that go through the auction process from 450 to more than 800 per week. Between 65 and 75 percent of those get sold, Motley said.

The facility is expected to open in early 2014. It is designed to allow the addition of an eighth lane for the auto auction, but Motley said the new space “should take them well into the next decade.”

As for the big rig on the auction sign, it will come down during construction and get an upgrade of its own, Motley said. 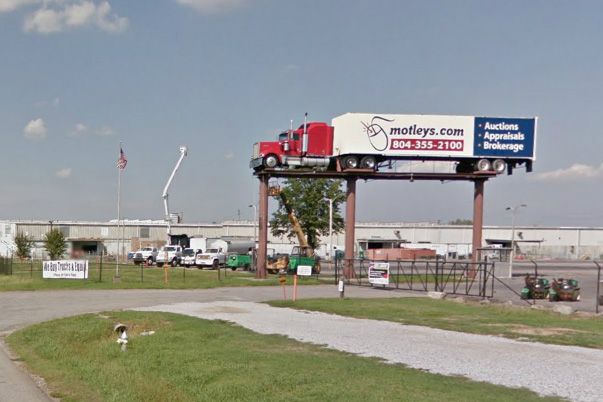 The Motley’s truck, visible from I-95, will get its own upgrade. (Image via Google Maps)

Worked with Mark for years while I was with the City. He is a great guy and having his office in City is excellent news. The building on Broad was actually in Henrico with the parking lot in the City.

This also is a big help to the cleanup of the area on Southside near the DWT!!