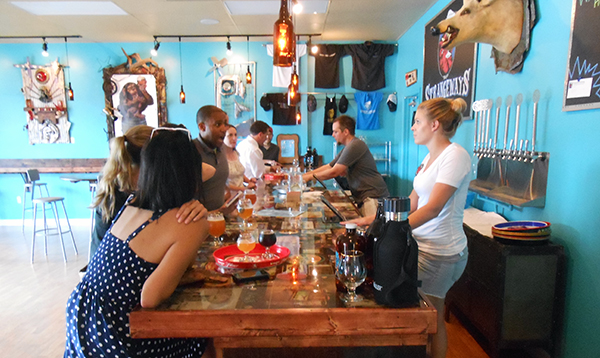 Strangeways is rolling out new “Curiosities” each week. (Photos by Burl Rolett)

Strangeways Brewing, which opened in late May on Dabney Road, is releasing new beers every Wednesday in a campaign it calls “Curiosities.” Founder Neil Burton said the tastings are part of the brewery’s “soft opening,” now in its fifth week. The company has advertised only on social media and has yet to host any sort of grand opening event.

“We haven’t been promoting the tasting, we’ve really just been promoting our brand,” Burton said. “We wanted to make sure we had a fair number of beers to serve so if people come out for a big event like that they come out and there’s a reason to come out.” 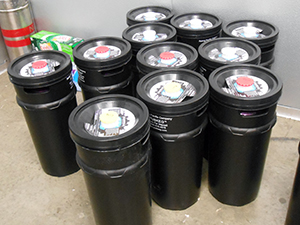 The small-batch beers are stored in barrels that fit a little more than five gallons each.

The unconventional brews are variations on Strangeways’ flagship beers, with flavors added after the original beers have finished brewing.

Brewers Mike Hiller and Chris Cawthon have been working through a backlog of ideas, trying peach, pineapple, berry and chocolate flavors.

“It’s just kind of a cool concept they came up with,” Burton said. “My brewers have been experimenting with this idea for a while, and we’ve talked about doing it for a long time, probably since I met them.”

Burton unveiled his first batch of Curiosities on June 19. All three of the small-batch beers were gone by the next day. Despite their popularity, however, Burton doesn’t anticipate producing any of the beers for distribution outside of the brewery.

“It’s going to be very, very difficult to translate on a larger scale,” he said. “We’re really dedicated to producing beer for the restaurants and getting any beer that we make in any quantity to them first.”

Strangeways, which is carried by Brown Distributing, is on tap at more than 50 area restaurants. Burton hopes to begin bottling this fall.

The brand on Friday released a fourth flagship beer after the requisite quality control tasting process.