A lawsuit filed July 8 in Richmond City Circuit Court alleges that Star Scientific’ s board of directors engaged in a “campaign of deception” that eventually unraveled, tarnishing the company’s reputation and pushing down the price of its stock.

The suit, which plaintiff Harold Levine filed on behalf of all Star shareholders, targets five members of the company’s board of directors: chief executive Jonnie Williams, president and chief operating officer Paul Perito, Christopher Chapman, Neil Chayet and Burton Haynes. The suit claims that Star misled investors in 2012 by touting an association with Johns Hopkins University that did not exist. 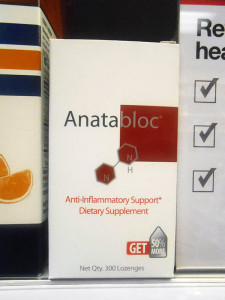 Anatabloc on the shelf of a Richmond GNC store. (Photos by Burl Rolett)

Star markets a chemical compound known as anatabine under the brand name Anatabloc. The suit stems from Johns Hopkins’s alleged involvement – or lack thereof – in two studies: one on a study of the drug’s effect on thyroid disease in mice and the other on the same process in humans.

In a June 2012 press release, Star reported that a study carried out by an “independently funded research team at Johns Hopkins” found potential thyroid benefits in mice treated with anatabine.

Paul Ladenson, who is a Johns Hopkins professor and who was identified as such in Star’s press release, was quoted in the statement as saying that a human trial was underway. His quote did not address where that trial was taking place. Star’s statement did not specify whether or not Ladenson participated in the mouse trial.

In the same press release, a doctor from Rock Creek Pharmaceuticals – a Star subsidiary – said that the “impressive results achieved by the Johns Hopkins team strongly support the first look at the thyroid data in man” and is quoted as saying that Rock Creek had designed and was conducting a human trial.

The lawsuit alleges that a financial securities analyst in August and an investment advice website in October issued reports falsely tying Johns Hopkins to human studies of Anatabloc. Excitement over the study built to a “fever pitch,” the suit said, with the defendants’ “acquiescence.”

On Jan. 7, 2013, Star announced preliminary results from their human trial, which the company said showed a positive relation between anatabine and thyroid health. Ladenson was again quoted in Star’s statement, but this time his employment by Johns Hopkins was not disclosed. Star’s Jan. 7 press release did not mention the university, but the lawsuit claims it made references meant to tie Johns Hopkins to the study. 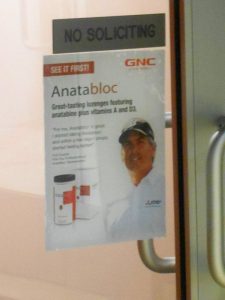 An Anatabloc ad on the door to Star Scientific’s office.

Star’s stock rose 22 cents, about 8 percent, the next day.

On Jan. 23, financial news website TheStreet.com published a blog post alleging that Star concocted an “imaginary” relationship with Hopkins that misled its investors. The story quoted a university spokesperson saying that the university neither conducted nor approved the human trial.

Star’s stock fell almost 12 percent, to $2.33 from $2.63, the day TheStreet published its post. Star responded Jan. 28, stating in a press release that the human trial “was not sponsored by the Johns Hopkins School of Medicine, and the Company never reported otherwise.” The statement reiterated that Hopkins did carry out a test that used mice as subjects.

Johns Hopkins spokeswoman Kim Hoppe confirmed that Hopkins researchers ran an anatabine trial using mice as subjects in 2012 and that the test was not associated with Star. The university has never been involved in any Star-sponsored clinical studies, Hoppe said.

Star spokesperson Talhia Tuck declined to comment on the case or on whether the company attempted to contact the analysts who disseminated false information about Star’s human anatabine trials.

The 42-page suit, brought by Richmond-based firm Phelan Krudys Petty and Louisiana-based Kahn Swick & Foti, was filed July 8 in Richmond City Circuit Court. It is a shareholder derivative complaint, which is a legal tool available to a company’s shareholders if they believe the firm’s board of directors has not acted in their best interest.

The suit argues that petitioning the board for a remedy would indeed be futile because Williams and Perito depend on the company’s success for their livelihoods and because Chapman, Chayet and Haynes would likely bear significant liability in the event of any wrongdoing.

The shareholders are requesting judgment against the defendants equal to the damages sustained as a result of their alleged wrongdoing, the suit says. They also hope to put to shareholder vote a series of amendments to the company’s bylaws and articles of incorporation.

Attorneys for the plaintiff declined to comment beyond what has been stated in the lawsuit.

Star has been in the news recently as state and federal investigators look into a series of gifts that Williams, Star’s chief executive, gave to McDonnell and his family in 2011 and 2012. Attorney General Ken Cuccinelli has also come under fire for a sequence of purchases and sales of Star’s stock, of which he held more than 7,000 shares of before selling in April 2013.

Star reported an $8.2 million net loss for the first quarter of this year, compared with a $5.2 million loss for the same period in 2012. In a press release, the company attributed the increased loss to sales and marketing costs, research and development costs, and legal expenses. Star’s stock closed Wednesday at $1.88. 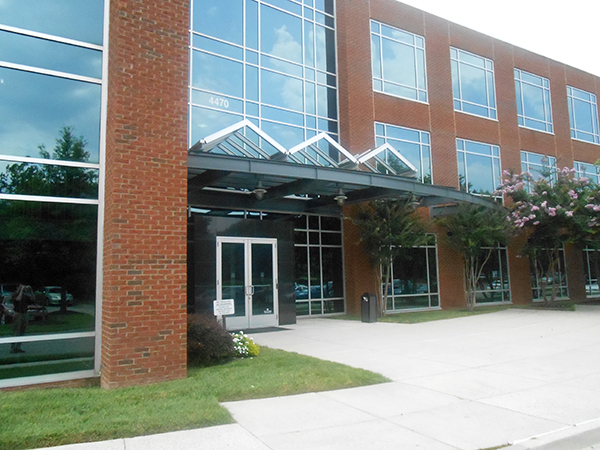 Star’s corporate, marketing and sales offices are in a suite at 4470 Cox Road.

A re-post of an article from a couple of months ago.

Over the next couple of months up to 14 law firms filed class action law suites. All looking for a lead plaintiff. No one signed up.

This will go nowhere as well.