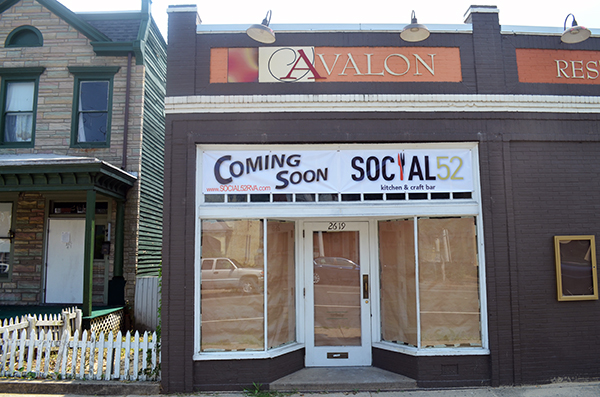 A longtime Fan bar will soon reopen with a new look, a new name and a lot more beer.

The pair closed the business in early June to renovate and rebrand the restaurant, Sanie said.

“We had nothing to do with 20 years of operating, so we thought it would be in our best interest to go with a new concept,” said Sanie, 34.

Social 52 will have no fewer than 52 craft beers available, although not all will be on tap, Sanie said.

The eatery has hired former Hill Café and Europa chef Oscar “Mac” McCrowell to develop a menu. Although more moderately priced, the selection will still have “neighborhood favorites” such as Avalon’s Brussels sprouts, Sanie said. The menu will also have more vegetarian, vegan and gluten-free options, he said.

Sanie said he hopes to have the renovations finished next week so the pair can focus on marketing and hiring between 25 and 30 employees.

The restaurant is expected to open Aug. 12, Sanie said.

Social 52 is not the only restaurant in town to rebrand this summer.

After closing for less than a week, Mediterranean Bistro reopened as Luckie’s Bar & Grill in the Fan. In Shockoe Bottom, Sette Fire Roasted Pizza closed and reopened as 23rd & Main Kitchen & Taproom. Owners of the Lucky Buddha closed the Asian eatery in early June and expect to reopen as Society before the end of the month.

All the best to Walied and James in the re-launch! Always hard to see an institution like Avalon move into the past, but I am excited to see all of the renovations and fresh ideas!

I have so many great memories from Avalon. I wish they had kept the name, or at least given it a name that commands a little bit more respect; the new place sounds like some sort of ridiculous flash-in-the-pan hipster bar. Ambiguous noun/verb + number? Give me a break.