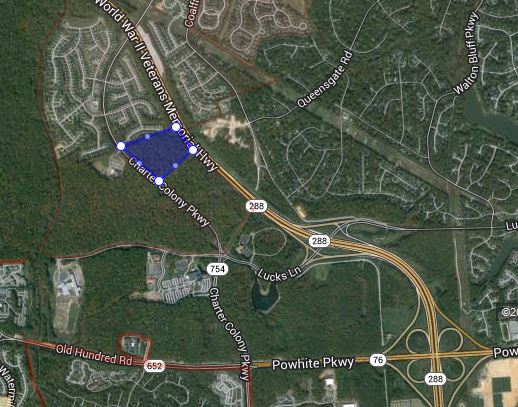 A Norfolk-based developer has 255 apartments in store for Chesterfield.

The project will be the second major apartment complex announced for Chesterfield in the past couple of months: The 368-unit Belmont at Chesterfield Towne Center is set to open next summer.

“That’s part of the story as to why we like the site and why we think it’ll do very well,” he said. “This pent-up demand isn’t being met with new development.”

The 18-acre property is part of the 725-acre CenterPointe mixed-use development owned by Richmond-based Riverstone Group.

CenterPointe is home to the CenterPointe office building and has more than 200 acres of undeveloped land bordering the Bon Secours St. Francis Medical Center and just north of Powhite Parkway.

Robinson bought the development site in January 2012. The firm put the property on the market this year.

The development site is exempt from an $18,000 per door Chesterfield County proffer, a loathed tax on new residential sites that many developers say slows the pace of development.

Charles Wentworth, a broker who marketed the property, said Monday that the low supply of apartments in that area makes the property an attractive space to develop.

“Probably under 300 units have been delivered in the last five or six years,” he said.

Robinson will develop the project in joint venture with Hampton Roads-based real estate firm Drucker & Falk. It will be in charge of leasing and managing the apartments when the complex is complete.

Robinson hopes to have some units ready for occupancy in fall 2014 and finish the project by summer 2015. The company has yet to name a contractor for the job. Virginia Beach’s Cox, Kliewer & Company is the architect.