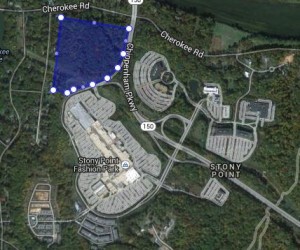 New stores aren’t the only things popping up at Stony Point.

Atlanta-based developer Wood Partners is planning a 282-unit apartment complex next to Stony Point Fashion Park on a 27-acre plot just north of Dilliard’s. The $40 million project will include four buildings standing three and four stories tall and a handful of smaller carriage units.

“The idea is to make it look like a little village, or a small neighborhood,” said Carter Siegel, Wood Partners’ regional director.

The company has yet to name a contractor for the job. North Carolina-based Cline Design is the project’s architect. Design Resource Group and Richmond-based Timmons group are in charge of planning and engineering.

The developer is under contract to purchase the Stony Point development site, said Jennifer Mullen, a Roth Doner Jackson attorney representing the firm. The land is owned by an LLC that shares an address with Michigan-based Taubman, which developed the mall in 2003.

Plans for the development call for 104 one-bedroom units, 154 two-bedroom units and 24 three-bedroom units. Wood Partners hasn’t determined rental prices, and Siegel said only that they would be “comparable with what is nearby.”

Richmond-based Commonwealth Properties built and sold the Creek’s Edge Apartments about six years ago. The company is about halfway through building a 137-lot subdivision adjacent to the apartments.

Commonwealth Properties manager Steve Middleton said interest in the area has been strong.

“The apartments, I believe, are 99 percent leased,” he said. “The townhomes – we’ve had some pretty extraordinary demand with those in the last two years once the market started to recover.”

The Alta project is scheduled to go in front of Richmond’s planning commission next month after receiving a 30-day continuance at last week’s meeting. Wood Partners is seeking an amendment to the Stony Point Community Unit Plan, which designates the plot for retail, office and restaurant use. Planning department staff has recommended approval of the amendment, according to city records.

If approved, Alta Stony Point will be the Wood Partners firm’s first development in the Richmond market. The developer also built the 280-unit Streets of Greenbrier apartments in Chesapeake this year.

What would be really great would be if they could get some residential or office integrated with the mall. I really think they are missing the boat on that one. The wide open parking fields in the back would be great for that. Then it would really have a village feel. Apartments behind a gate don’t have that feel…..