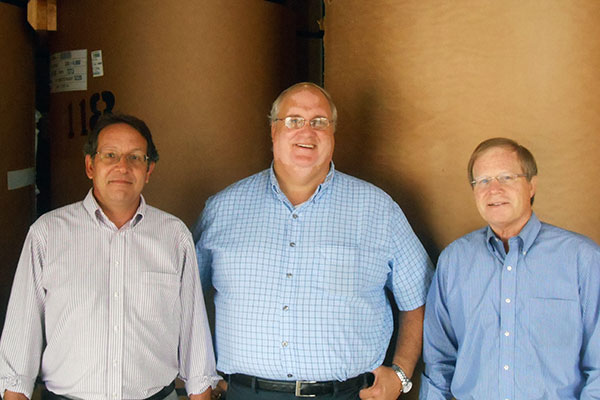 When the plant where they used to work was slated for closure in 2010, Geoff Baldwin, William Berry and Rick Ganzert decided to get the band back together.

Three years later, their plan has turned into one of the fastest-growing businesses in Richmond.

Baldwin, Berry and Ganzert worked at the 18-acre industrial plant off of Verdon Road in Hanover County when it was operated by Fiber-Lam in the 1990s. Almost 20 years later, Berry Plastics, then-owner of the plant, announced plans to close the facility in January 2010 and put it on the market.

With the backing of local investment banking firm Smither & Co. and Virginia Beach private equity firm Envest, the property was acquired and Baldwin, Berry and Ganzert signed on to help launch Specialty Coating & Laminating at the site.

The company manufactures waterproof sealant materials for use in industrial packaging as well as home wraps through a subsidiary called Barricade Building Products.

The firm topped Richmond BizSense’s inaugural RVA 25 list, which ranks the fastest-growing companies in the area. BizSense caught up with Baldwin, now SC&L’s chief executive, at its Doswell headquarters to discuss the firm’s explosive growth over the past few years and where it is heading from here.

Below is an edited transcript of the interview.

Richmond BizSense: As an industrial manufacturing company, the SC&L brand isn’t out in front of the everyday consumer. What exactly does your company do?

Geoff Baldwin: Our primary function is extrusion coating of industrial packing products. Our products are typically used downstream and combined with other products. For instance, you’ll see a corrugated box, and it may look just like a box, but if it has cookies or tobacco products or electronics it will have a moisture barrier within a liner that we create.

The other facet of the business is flexible building products. We are the second oldest producers of house wraps next to DuPont, as we’ve been making house wraps since 1986. Our Barricade Building Products line is a weather-tight system for your entire home, including the roofs, the walls, the flashing for around your windows and doors. It’s a complete system of materials to make your home weather tight.

RBS: After working at this plant with Fiber-Lam years before, you had an idea of what you could do here. What drew you and your partners back to this spot?

GB: It’s centrally located on the Eastern seaboard, with access to 80 percent of the population in the U.S. It’s also a major shipping point. We have the main CSX rail line right here that we can ship and receive by. We’re an hour and a half from the port, so we can export product as well as import products. We are right here on [Interstate] 95, so transportation is great.

RBS: It sounds like you tried to recreate a lot of what you had already done with Fiber-Lam at this location, and most of your first Specialty Coating employees came from Fiber-Lam. How did you track everyone down for the new endeavor?

GB: Every organization runs by having good people. I know it’s a cliché – everybody says that – but we really, truly believe it. We knew where good people were, and so we contacted them and told them we were putting the band back together, so to speak. We’d worked so well together, and they believed in our capabilities as well as their own. Everybody came back home. Probably 20 of our original 23 employees came from Fiber-Lam.

RBS: Your company employs 90 people now, meaning you’ve more than tripled your workforce in about three years. Has this growth exceeded your expectations for the business?

GB: It outpaced my projections, but I would say that it was kind of on track for where I hoped it would be. Certainly we try to over-deliver when we do something, not under-deliver. We’ve been pleasantly surprised that everything has come together. Usually you find a whole bunch of things that don’t quite hit. We’ve happened to hit on most of the cylinders so far.

RBS: How do you plan to continue growing Specialty Coating?

GB: We’re adding more equipment. We already have some equipment on order; we’re installing new lines right now in anticipation of expanded growth. We’ve also been developing products for the last three years that are getting ready to hit the market, so we’ve got a whole cast of new products both in the building products and the industrial and food packing products that are going to help fuel our growth.

We’re also adding additional capabilities that we currently don’t have, which are further integrations with some of the equipment we have now that will get us into new markets utilizing the equipment we have. The more tools we have in our toolbox, the more products we can sell.

Specialty Coating was named the top business in the RVA 25 rankings after an evaluation of each applicant by Richmond-based accounting firm Keiter. No BizSense representatives played a part in the evaluation process. A more detailed explanation of the RVA 25 can found here.