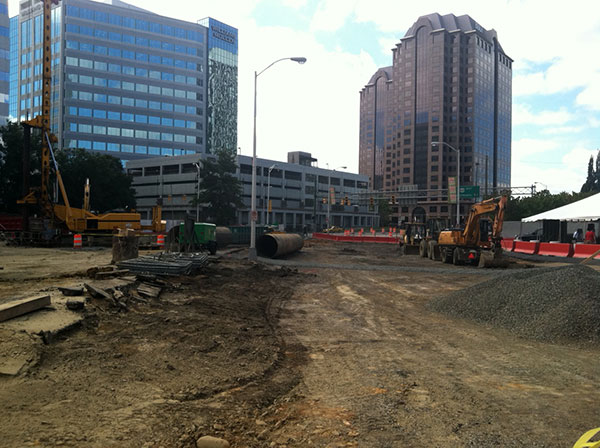 The Gateway Plaza site was once was the Eighth Street Connector. (Photo by Michael Schwartz)

Before it’s had a chance to get out of the ground, Richmond’s newest office tower has found a buyer.

New York-based Lexington Realty Trust has entered into an agreement to purchase the planned 18-story Gateway Plaza building at Eighth and Cary streets from developer Clayco upon the project’s completion in 2015.

The contract to purchase the building was finalized at the same time Lexington Realty Trust extended Chicago-based Clayco a loan for construction of the $124 million tower.

“Most of the proceeds will be used by Clayco to repay our construction loan, so the money goes in a circle for the most part,” said Dick Rouse, vice chairman of Lexington Realty Trust.

Rouse would disclose neither the amount of the original loan nor a sale price the REIT will pay. 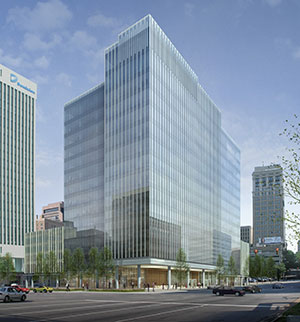 The planned tower will be 18 stories. (Courtesy of Crews Communications)

Law firm McGuireWoods has signed on as the building’s lead tenant. It will take about 215,000 square feet. Lexington’s investment strategy centers on buildings with one dominant tenant signed on for a long-term lease, Rouse said.

“This is not truly a single-tenant building, but McGuireWoods will occupy about 80 percent of it probably,” he said. “The first thing that attracted us is we’ve got a 15-year lease with a great tenant for almost all the space.”

Presales were a common arrangement between developers and real estate investors such as pension funds back in the ’70s and ’80s, Clayco Principal Larry Chapman said. With the rise of real estate hungry REITs, these sorts of arrangements are favorable for both sides in certain circumstances, he said.

“There are a lot more REITs looking than there are opportunities. There’s not a lot available that’s ready to buy right now,” Chapman said. “By acquiring an asset they like, they’re able to invest their capital today and start to get the return right away.”

Striking such a deal early in the process allows developers to repay the loan and put that money toward its next project. It also cuts out some of the hassle of having to deal with a separate lender.

“It allowed us to deal with one less entity,” Chapman said.

The presale deal does not affect Clayco’s arrangement for incentives from the city. Chapman said the city is aware of the deal with Lexington.

Although Chapman would not discuss the price that Lexington has agreed to pay, he said it’s determined by market cap rates – a ratio of how much income a building produces versus the price paid by the buyer – as well as the credit worthiness of the tenant and the amount of space preleased.

The tower was initially slated for 275,000 square feet of office space and 15 stories. The plans got taller – and $14 million more expensive – before a ceremonial groundbreaking this month. Construction began at the site in August, the same day Clayco closed on a deal to purchase the land from Dominion Resources for $6.2 million.

The tower will add to Lexington Realty’s Richmond holdings. It owns the Alstom Power building in Midlothian and three East Shore office buildings in Glen Allen, which the firm is marketing for sale. Rouse said Lexington doesn’t have any particular focus on the Richmond market and is open to potential deals wherever they may pop up.

“If a developer calls us with a 15-year lease with great credit in Detroit, we go to Detroit,” Rouse said.