A rendering of the planned Bon Secours hospice house. (Courtesy of Bon Secours)

Bon Secours Richmond Health Care Foundation announced Monday that it has privately raised $5 million toward the construction of a hospice house in Old Bon Air on the Southside. It went public with the plan as the organization looks for more money to make the 16-unit project at the corner of Robious and Old Bon Air roads a reality.

“We’ll be continuing with public fundraising,” said Cindy Reynolds, chief executive of the Bon Secours Richmond Health Care Foundation. “I know it’s going to be much more than $5 million.”

Reynolds would not say how much the organization is looking to raise for the hospice house that she described as a home-style setting for the terminally ill. 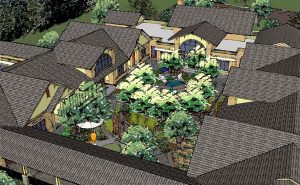 An overhead rendering of the facility.

The facility will be built on a 6.5-acre parcel donated by John Cullather and Anthony Markel.

Top donors included the Amy and Charles Millhiser Hospice Fund, the Richmond Memorial Health Foundation, the Cabell Foundation and the Mary Morton Parsons Foundation. Reynolds would not say how much each organization donated.

Reynolds said that building plans have not been finalized and that a contractor has not been selected. She said the organization hopes to begin work in the fall.

Research for the hospice house began in 2010, and the private campaign for funds began shortly thereafter, Reynolds said.

The house will provide pain management and counseling services for patients and family members. The staff will include a medical director, nurses, counselors, social workers, home health aides and a chaplain.

Bon Secours has a hospice house in North Carolina, and Reynolds said planners would use insights gleaned from that experience moving forward.

“We’re not reinventing the wheel,” Reynolds said. “But Richmond is a different health-care market.”

“It is another option that has less acute care than a hospital,” Reynolds said. “But it is more acute than in a home.”

The foundation is the public charity arm of Bon Secours Richmond, part of the Bon Secours Health System. The not-for-profit Catholic health system is based out of Maryland and has 40 locations across Richmond, including St. Mary’s Hospital, Memorial Regional Medical Center, Richmond Community Hospital and St. Francis Watkins Center.