Richmond’s city council will wait until October has passed to decide whether to clear the way for the city’s proposed ballpark acquisition. 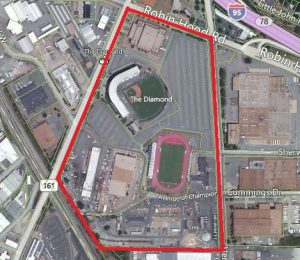 The city would own the entire area in red, with the exception of the Sports Backers Stadium just south of the Diamond.

The city council on Monday pushed back a planned vote that would allow the city to take control of the Diamond from the Richmond Metropolitan Authority with an agreement to lease the 9.32-acre property back to the RMA until any point when a new ballpark is built.

The two ordinances that made up the proposal were scheduled to be heard last night, along with another to accept from the RMA a release of easement on parking areas in the North Boulevard and Hermitage Road area. The third proposal was also pushed back, and the package is now on the agenda for the Nov. 11 council meeting.

No explanation for the delay was given at last night’s meeting.

The proposals call for the city to take over ownership of the North Boulevard property that houses the baseball diamond as well as some stadium parking. The city granted the property to the RMA in 1984.

If the city council passes the ballpark ordinance, it will give the city control of about 55 acres between North Boulevard, Hermitage Road and Robin Hood Road. The site has been tabbed as a potential site for a new mixed-use development if a new ballpark is built in place of the Diamond or elsewhere in the city.