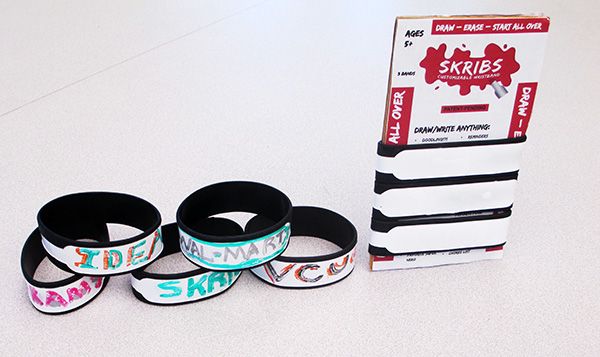 The VCU graduate student was at the gym last week when he got word that his customizable wristbands, called Skribs, won the grand prize in Walmart’s “Get on the Shelf” competition.

In addition to his products being sold on Walmart’s website, the grand prize victory gives Oredein’s product online marketing support from the retail giant and means he is closer to getting his wristbands on the company’s store shelves. 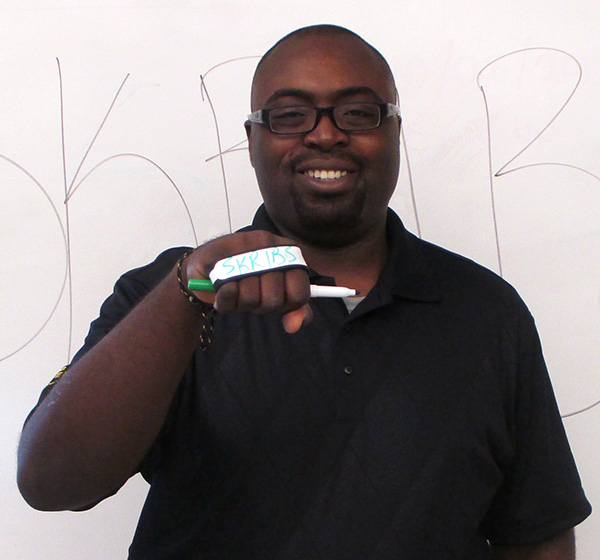 Tumi Oredein shows off his product.

The victory also means that Walmart is buying Oredein’s first large-scale batch of Skribs. He has a contract manufacturer that has begun churning out orders of Skribs.

Oredein’s manufacturer is Baby Fanatic, part of Worth Products Group, a product development firm that brings niche products to market.

Worth Products chief executive Darrell Jervey said 3,500 packaged units of Skribs are being produced for the first run. That amounts to 10,500 individual bands.

Jervey said Baby Fanatic is financing the production and will be reimbursed once Walmart cuts the company a check for the order.

“We’re paying to get [Oredein] off the ground,” Jervey said. “If [Skribs] becomes a staple, we’ll license it, and we’ll agree on a percentage to pay him of however much we sell.”

Production should be completed in December, when Jervey said Baby Fanatic would ship the order to a Walmart distributor in California.

A product innovation major at VCU’s da Vinci Center for Innovation, Oredein has had a series of victories in 2013 thanks to Skribs.

The momentum began when he won money for his idea at a VCU pitch contest in the spring.

After getting into Walmart’s contest, Oredein made it through a video pitch round of 20 other finalists. He was one of five winners in that stage. For the grand prize, Skribs bested its competition by earning the most online pre-orders at Walmart.com.

Jervey said he believes Skribs will make the next step onto Walmart shelves.

“It could be another trend product,” Jervey said.

Oredein said Skribs would be available on Walmart.com indefinitely and at least for the upcoming year. The customizable wristbands can be ordered in packs of three that come with a marker for $8.95.

Although Oredein said he plans eventually to sell the rights to Skribs, he said he wants to ensure his prize-winning invention is in a position to do well.

“The main thing on our minds is having to now supply a multibillion-dollar company,” Oredein said. “If [Skribs] becomes trendy, we want to be sure we’re abiding by the structure of how to make sure it grows.”