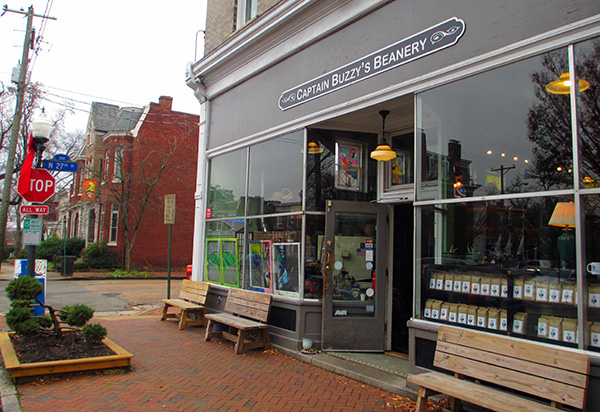 A Church Hill coffee shop claims a mutiny by a local neighborhood group sunk it’s plan to add alcoholic beverages to the menu.

Captain Buzzy’s Beanery, owned by Bob Buffington, this week sued four neighbors, the Church Hill Association and two local businesses over a special-use permit Buffington requested so that he could sell beer and wine and keep his shop open an additional hour. 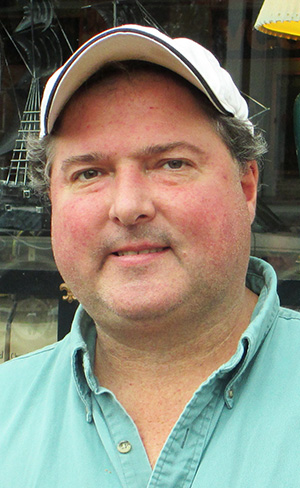 The lawsuit alleges that the Church Hill Association – the local neighborhood group – supported Buffington’s request until few neighbors “hijacked” the association, ignored its bylaws and deceived association members, city planning commissioners and city council members in an effort to get the permit denied.

In addition to seeking $3 million in compensatory damages and $350,000 in punitive damages, the lawsuit asks the court to appoint a “special master to un-hijack the association.”

The lawsuit, filed this week in the Circuit Court for the City of Richmond, names John Whitworth, Kimberly Chen, Karen Jones, Amy Beem, the Church Hill Association, the 2300 Club and Johannas Design Group as defendants.

In February, Captain Buzzy’s, located at the corner of East Broad and North 27th streets, applied to amend its special-use permit to allow it to sell beer and wine and stay open an additional hour a day.

At the meeting, the lawsuit alleges, Whitworth asked for a delay in the vote so that the association could meet again to reconsider the matter, misrepresenting himself as speaking on behalf of the association.

The 2300 Club, a private club on East Grace Street, is named as a defendant because Whitworth is a board member and treasurer. According to the lawsuit, if Captain Buzzy’s could sell beer and wine, it would be a direct competitor of the club. The club president could not be reached Wednesday, but an employee who answered the phone there said Whitworth is neither an officer nor a board member of the club. 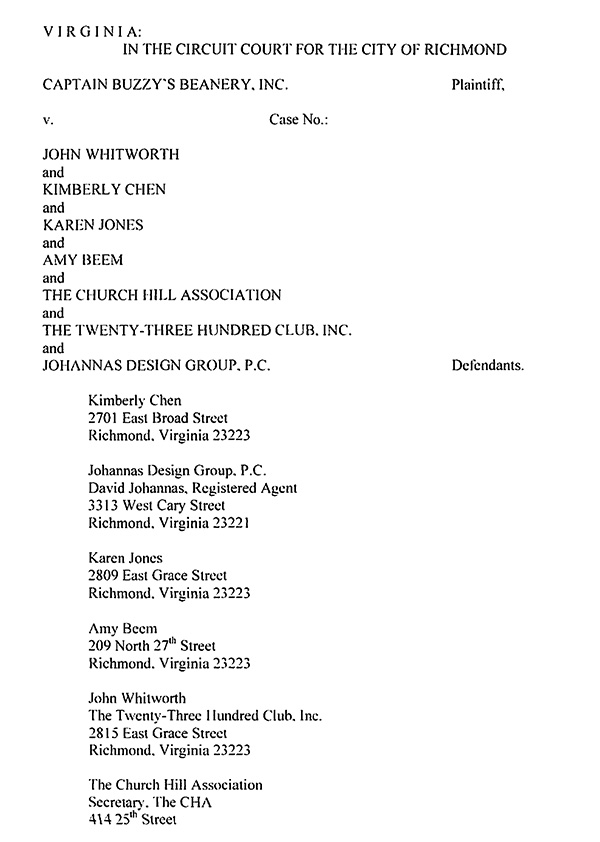 According to the lawsuit, Chen has a “personal vendetta” against Buffington.

Johannas Design Group, based on West Cary Street, is listed as a defendant because Chen is a partner there and because she allegedly sent “tortious” emails using her professional email account. Those emails included messages sent to each city council member with a survey that falsely indicated that almost all of the nearby residents opposed the plan, the lawsuit said.

The lawsuit said Beem only joined the Church Hill Association so that she could oppose Buffington’s request. It alleged that she tried to get the association’s initial approval of the request overturned, erroneously stating that all of the houses near Captain Buzzy’s opposed the plan and that Buffington planned to sell the business.

According to the lawsuit, Jones repeatedly requested that the association revisit Captain Buzzy’s request, although the then-president of the association told her that was a violation of their rules.

The lawsuit said that, in July, Jones, Chen and Whitworth “forced” the association to violate its rules and vote again on Buffington’s request. Buffington was not present at the meeting because no one notified him, despite Chen’s insistence that she did, the lawsuit said.

In late October, city council members denied Buffington’s request with a vote of 4-3. According to the lawsuit, they were “misinformed and heavily lobbied.”

Buffington’s attorney, D. Hayden Fisher of Richmond-based Fisher Clarke, said he plans to hire an expert to show how much revenue could’ve been expected if Buffington had been allowed to sell beer and wine and stay open an extra hour. He estimates Buffington’s potential loss to be as much as $1 million.

Chen, Whitworth, Jones, and Beem could not be reached for comment Wednesday. A woman who answered the phone at Johannas Design said they had no comment but declined to give her name. The person listed as president on the neighborhood association’s website could not be reached.

I think that it is sad that the neighborhood association and residents would oppose a business which has contributed to the economic revitalization of that corridor. It’s really amazing when people act against their own interest because of entrenched and outdated ideologies.

Very well said Carter! I’ve worked with “Captain Buzzy” in the past and hope this gets resolved without getting any uglier.

Hey Bob….go get them. I wish you luck and I would like to contribute to your legal fees. I am tired off the minority trying to rule the majority.

One note I haven’t seen mentioned in this ongoing discourse is that a full restaurant and bar operates literally one block from Captain Buzzy’s with next to zero associated neighborhood issues. How can this not be personal when the precedent for alcohol in the immediate vicinity has already been set?