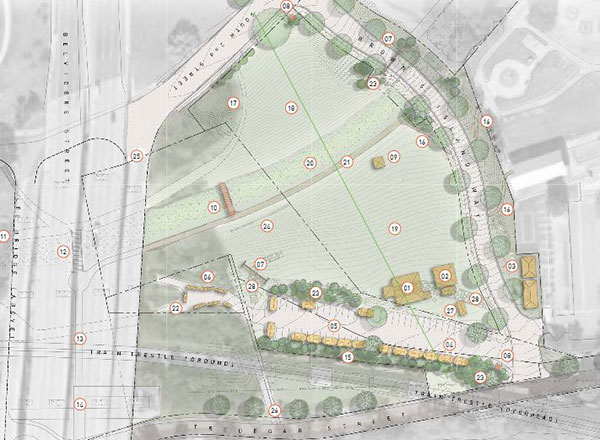 The Richmond Planning Commission on Tuesday delayed a decision on final approval of Venture Richmond’s proposed amphitheater at Tredegar Green – a facility the economic development organization says is key the continuation of the Richmond Folk Festival.

The vote was continued for 45 days amid concerns about how the plan might affect future navigability at the Kanawha Canal, which is dry and overgrown, and who would pay to modify the amphitheater if the project compromises a future refilling of the canal.

The delay came as a surprise to Venture Richmond and its executive director, Jack Berry. The group is working to get the new facility up and running in time for the popular music event and its 200,000 attendees in October.

Berry said Venture Richmond does not have a contingency plan for hosting the main stage of the Folk Festival if the proposed amphitheater is not ready.

“Our timetable is already very compressed, and it will make it very difficult for us to have the site ready for the 10th anniversary of the festival in October,” Berry said. “I never imagined that we would be in this position, so we don’t have a Plan B yet.”

Venture Richmond proposed building the $500,000 amphitheater at Tredegar Green to host the main stage for the Richmond Folk Festival. The stage has previously been housed on adjacent land owned by NewMarket Corp.

The proposed site is a 4.5-acre piece of land bounded by Second and Tredegar streets to the north and south and Belvidere Street and the Second Street Connector to the west and east. The site spans land that NewMarket granted in 2012 to Venture Richmond and land the city owns and leases to Venture Richmond. The city-owned piece, about 1.6 acres, is the only part of the project site the Planning Commission considered Tuesday. 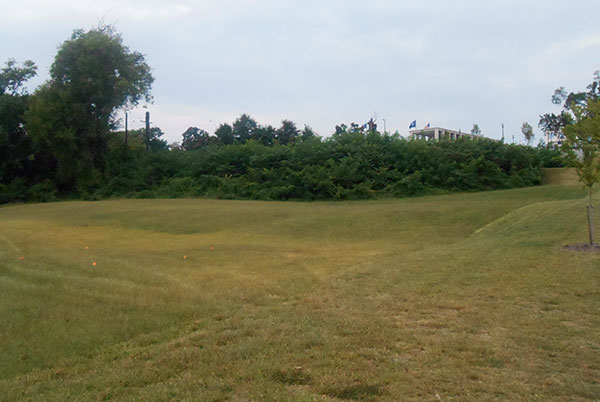 The site of the proposed amphitheater, with the Virginia War Memorial in the background. The overgrown area is part of the canal. (Photo by Burl Rolett)

The Kanawha Canal, listed on the National Register of Historic Places, cuts through about 500 feet of the site on both city- and Venture Richmond-owned land. The proposed amphitheater would narrow the canal’s towpath to 12 feet and lower it to 83 feet above sea level.

Berry said that is where the towpath sat during the canal’s era of navigability, but opponents say that the towpath was as high as 85 feet above sea level and that the proposed level might not be sufficient for boat traffic.

The commission floated the idea of adding a lease term that would make Venture Richmond liable for bringing the canal back to a navigable state if its proposed upgrades compromise the city’s ability to refill the canal and potentially open it to boat traffic.

The city’s Urban Design Committee suggested that the commission approve the final plan with a condition that would shift that liability to Venture Richmond, but the city attorney’s office determined that the Planning Commission would likely not be able to legally enforce such a condition.

Council and Planning Commission member Kathy Graziano introduced the motion for a continuance. She credited Venture Richmond for bringing to public discussion the potential refilling of the dried-out canal but sought some assurance that Venture Richmond would take care of potential damages.

“We’re all sitting around talking about a canal and the possibility of water being in it by 2050,” Graziano said. “Venture Richmond wants to improve it as best as it can until the city can afford to put water in it.”

Berry said Venture Richmond would be willing to bear the costs of fixing the canal if the plan lowers the towpath to an un-navigable level but said he is “90 percent” sure that won’t happen. Even if it did, he said, the cost of building up the towpath again would be negligible.

“If I’m wrong, I’m willing to add however many inches are needed,” Berry said.

Berry welcomes a lease modification but said that Tuesday’s meeting was the first time he had been approached about using the lease agreements as a means of guaranteeing Venture Richmond’s commitment to potentially raising the towpath. He worries that the process will eat up time between and the October Folk Festival

Council member Parker Agelasto, who spoke on his own behalf and in favor of a continuance, said that City Council and Venture Richmond could get a new lease worked out in four to six weeks.

Berry hoped to get final approval of the project Tuesday so Venture Richmond could improve part of the site if wetland survey delays made it impossible to complete the project before the Folk Festival.

Renovations on the lower section of the proposed amphitheater could proceed with Planning Commission approval but in absence of a wetlands disturbance permit, provided the work did not extend to the canal itself.

“If everything else fails and I have no other choice, I want to at least be in a position where we can have a nicely graded lower bowl,” Berry said.

The project has also faced criticism from residents of nearby Oregon Hill, who worry that the amphitheater would be disruptive to the neighborhood and that its use could extend far beyond the annual Folk Festival.

An amphitheater could be used for events up to four days a year, under the same city ordinance that allows the annual Greek Festival, but its use could be extended if Venture Richmond seeks rezoning on site.

Let’s get a few things clear- Its not Oregon Hill residents or historic preservationists who are threatening the Richmond Folk Festival. It is Venture Richmond’s own corporate partners who say they are not going to let them use their private land anymore. What are their ultimate plans for this land? Secondly, this is not just about the Richmond Folk Festival. Jack Berry is trying to get the amphitheater project done without any restrictions so that he can rent it out to anyone at any time. It is reprehensible and thoroughly dishonest and DISHONORABLE for Jack Berry to keep presenting this… Read more »

Is it necessary to disturb the canal?

The more I have learned about this issue, the more respect I have for the research and advocacy being done by neighborhood residents on the historic canal issues. I’m so glad they are being addressed. The article barely mentions another serious concern. So far Venture Richmond has said they want to hold concerts in addition to the Folk Festival and have insisted that they want no restrictions whatsoever on frequency of concerts, noise levels or a stopping time for amplified sound. I have not seen plans for parking arrangements. Yet they are proposing a main stage much closer to our… Read more »