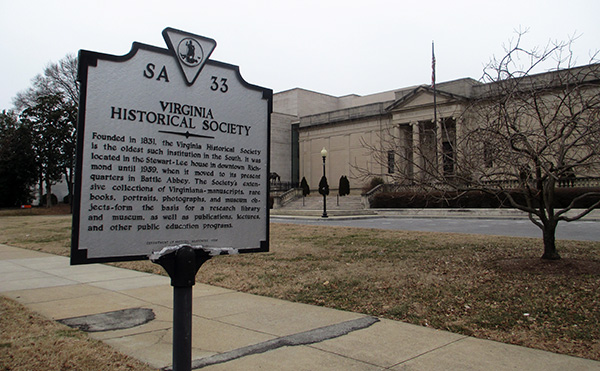 The Virginia Historical Society is almost ready to put a new face on its building. (Photo by Burl Rolett)

Inching closer to a $38 million fundraising goal, the Virginia Historical Society is ready to put a new face on its North Boulevard home.

“As of yesterday [Monday], we now have a construction trailer sitting in our back parking lot. Work will begin in earnest here shortly,” VHS president and chief executive Paul Levengood said.

Over the next year and a half, the 200,000-squaure-foot museum and library at 428 N. Boulevard plans to update two of its entranceways, revamp its classroom space and renovate its galleries, including its staple “Story of Virginia” exhibition. 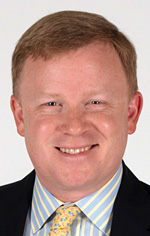 Construction-related expenses are expected to run about $11 million. Levengood hopes to wrap up construction in 18 months and will reopen parts of the museum as individual sections are finished.

Whiting-Turner is the project’s general contractor, and architects Glave and Holmes designed the museum’s renovations.

The project is being paid for through private funds. The VHS applied for more than $22 million in state bonds to kick-start the project while capitalizing on low interest rates, but Levengood said the nonprofit plans to pay those off in short order as pledged funds roll in.

The VHS has rounded up $30 million in donations and pledges in about the past two years and is inching toward a $38 million goal. About $20 million of that will be used for capital projects, Levengood said.

It will be the first time the building’s Boulevard-facing façade has been updated in more than two decades. The VHS plans to get rid of a parking area between Boulevard and the museum and add green space for what Levengood hopes will be a “friendlier, more inviting” approach.

The museum will also upgrade its southern entrance, which faces the Virginia Museum of Fine Arts, by adding a pavilion to make the entrance visible from the VMFA and the VHS parking lot.

“It will give people a much grander arrival experience than they have now,” Levengood said. 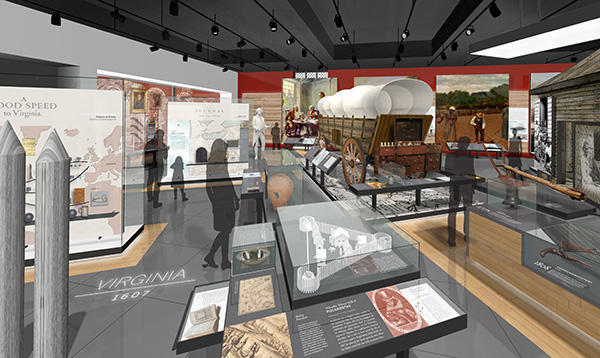 A rendering of the updated “Story of Virginia” exhibition. (Illustrations by Brent Johnson Design)

Inside, the VHS will upgrade its gallery space and add a 5,000-square-foot learning center on the museum’s ground floor.

Plans include a facelift for the VHS’s permanent “Story of Virginia” display, whose highlights include a 1700s-era Conestoga wagon and a 1918 Richmond streetcar. The VHS hopes to make the 15-year-old exhibit more interactive and create a more straightforward floor plan.

“It’s not quite as segmented an experience,” Levengood said. “You don’t have as many rooms, and it allows people to move through more easily. It also gives us some interpretive opportunities if you don’t look at history as kind of isolated time periods.”

Although the VHS has closed down its galleries, the museum will continue its schedule of classes and lectures while the work is underway.

“We’re going to roll things out as we go along,” he said. “Certain things will become available as they are finished, and open to the public.”