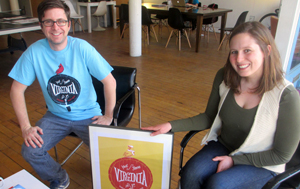 John Mills and Rebecca Redington show off some “Get Some Virginia in Ya” gear.

A local marketer is trying to give the Virginia craft beer scene a new catch phrase.

“Get Some Virginia in Ya” is the theme of a new campaign and line of merchandise designed to promote the state’s growing beer industry. The effort is led by John Mills and his firm Release The Hounds, a marketing agency on West Broad Street.

“We’ve just been watching, like everyone, the craft beer explosion in recent years,” Mills said. “We saw an opportunity to create a brand for Virginia beer as a whole. This was something we could do to create a brand that didn’t exist and create a revenue stream for the brewers guild.”

Ten percent of money made from the sale of “Get Some Virginia in Ya” T-shirts goes to the Virginia Craft Brewers Guild, an affiliate of the Virginia Manufacturers Association that lobbies on behalf of the brewery industry. Mills is hoping to add pint glasses and growlers in coming months.

Each T-shirt is emblazoned with the campaign slogan and logo.

Release The Hounds worked with Chris Peel, a graphic designer at the Martin Agency, to come up with the design – a cardinal, Virginia’s state bird, perched atop a tapped barrel that’s filling a pint glass.

“Over beers, I told him about the concept and we just started sketching things out on napkins,” Mills said.

The slogan was adapted from something Mills’ wife said in a telephone conversation with a friend. She said, “It’s the Virginia in ya,” when referring to something she did contrary to her New York upbringing.

Mills ran with the phrase.

“There are lots of cool things that make Virginia special and now, craft beer is becoming one of those,” he said. “Whether you love Hardywood or Blue Mountain in Charlottesville or Midnight in Rockville, it’s something that unites everybody.” 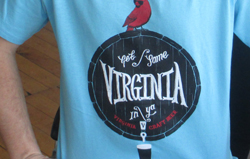 T-shirts are on sale for $20, 10 percent of which goes to the Virginia Craft Brewers Guild.

Mills said the campaign isn’t intended to be a moneymaker for his business.

“We have no delusions that this is going to be something that’s going to make us rich. It’s more just to get involved,” Mills said.

The Richmond brewery scene already has at least one pied piper spreading the word about local brews. Brown Distributing in recent years has pushed its Taste The Local campaign to promote beers from Central Virginia. Brown has been dominant among local distributors in its push to sign many of the area’s new breweries to distribution deals.

Statewide, Virginia has more than 60 breweries in operation, according to Virginia Tourism Corporation. Seven are up and running in the Richmond market, with at least three others in the works.

They seem like nice people. A little late to the game, however.

The “Taste the Local” state brand was a forerunner. Since 2011.