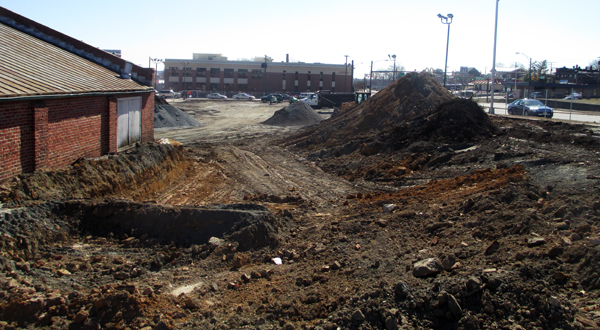 The future home of Hatcher Tobacco Flats at 151 W. Commerce Road in Manchester.

The 1.8-acre Hatcher parcel caught the company’s eye as it worked on the nearby Lofts at Trolley Station.

“We liked the area and ended up moving our office to the adjacent building,” Genesis Development Officer Ed Solarz said. “We’re very familiar with the area and we thought that we could acquire and develop the land for the right price.”

The project will cost about $18 million to develop, including land acquisition. To offset some of the cost, Genesis has earned a tax credit for agreeing to keep rent at the building at below market rates for tenants of certain income levels.

The company has secured a low-income housing tax credit through a federal program administered by the Virginia Housing Development Authority. Genesis is participating in a version of the program designed to allow developers to recoup up to 70 percent of qualified development costs.

Solarz said that 150 of the project’s 152 apartments will cater to renters at about 50 percent of Richmond’s media income. That level sits just shy of $40,000 per year, according to the U.S. Census Bureau.

Genesis can get estimated credits of about $1 million a year or $10.6 over a 10-year period through the program. That figure would offset about 60 percent of the company’s $18 million investment.

The tax credits can then be sold to third-party investors to drum up equity. The promise of that tail-end income allows the developer to secure financing at a lower cost.

Richmond-based Fountainhead Development is using a similar program, allowing it to recoup potentially 30 percent of the qualified costs for its Miller Manufacturing building rehab on Stockton Street.

One-, two- and three-bedroom units at the Hatcher Tobacco Flats will rent for between $500 and $900 a month to keep within the range of the HUD program. Rooms will range from 600 to 1,000 square feet and the building will have one ground-floor commercial space.

Despite the lower price, Solarz said the building will have many amenities that tenants expect in market-rate complexes, including covered parking, an on-site leasing and management office, a fitness room, clubhouse and security.

Genesis is shooting for an April 1, 2015, completion date on Hatcher Tobacco. The company filed plans for the project more than a year ago. It originally hoped to finish this April but did not line up financing in time.

Walter Parks is the project’s architect and MGT Construction is the general contractor. BB&T provided financing.

This is the third Richmond-area project Genesis has under construction. It is also working on 174 units at the Edison at 7th and Franklin streets and 151 units in Union Hill.

Hatcher Tobacco is the latest to break ground in what has been a frenetic Manchester development rush in recent years. The neighborhood has grown by 3,000 apartment units since about 2006, including projects that are still under construction or are in the planning phase.

Port RVA, apartments at 12th and Bainbridge, and the first of the Reynolds South apartments are among projects currently under construction in the Southside neighborhood.

Robin Miller, who along with Dan Gecker and Mark Purcell is nearing completion on Manchester’s 1200 Semmes, sees the pace of apartment development continuing in that section of the city, although the construction playbook is changing in the blocks near the Hatcher Tobacco Flats.

“Initially it was conversions of historic buildings – the Old Manchester Lofts, all of those over near Legend [Brewing Co.],” Miller said. “Now that all of those are gone it’s switching towards new construction.”