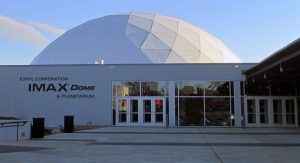 The theater at the Science Museum of Virginia just underwent a $2.25 million renovation. (Photo by Brandy Brubraker.)

After a seven-figure upgrade, a local museum has trips to the moon at $9 a pop.

The Science Museum of Virginia unveiled its newly renovated Dome last week. The $2.25-million project rocketed the facility out of 1980s-era technology and into the digital age, museum director Richard Conti said.

“There have been some changes to the world since 1983,” Conti joked to a Friday crowd made up of museum members, the press, local officials and others. “They literally don’t make domes like this anymore.”

The new screen consists of 480 “precisely fitted aluminum panels,” Conti said. It’s a quarter-acre in size, making the screen the largest in the commonwealth.

Those in attendance Friday went on a tour of the Milky Way and beyond. The trip to the moon took just 30 seconds.

The Dome officially opened Saturday. Each show there costs $9 for the public or $5 for museum members.

The Dome upgrade is the second phase in the museum’s $60 million “Inspire the World” capital campaign, Conti said.

“You have to reinvest in a science museum,” he said. “Things wear out and get old.”

“Great White Shark” is one of the shows visitors can watch. (Photo courtesy of the Science Museum.)

The campaign kicked off last year with Boost, a new $4 million permanent exhibition. A new gallery called Speed is coming next year, Conti said. A special events center is the goal for 2016.

Conti said the campaign is a mix of private and public funding. The state funded The Dome, while Boost received $4 million in private donations.

Some of the museum’s biggest corporate donors in 2013 included HDL and HCA Virginia Health System, according to its annual report.