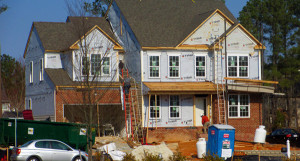 A house under construction in Stable Hill neighborhood is one of many subdivisions with new houses in the works. (Photo by Brandy Brubraker.)

The good old days may have not yet returned, but local homebuilders saw an upswing last year.

The area’s top 10 local builders constructed 32 percent more houses in 2013 over 2012, according to a list compiled earlier this month by Richmond BizSense.

The top 10 local homebuilders on the list accounted for about 85 percent of the construction activity among the group. Those 10 constructed 1,741 houses in 2013, compared to 1,320 in 2012, according to the list.

“As jobs come back and the economy begins to improve people will want to get into a house,” he said.

A study recently released by the Home Building Association of Richmond found similar momentum in the market in 2013.

HBAR’s figures, which were produced along with local marketing firm Commonwealth Partnerships, show that new home sales increased by 30 percent in the Greater Richmond area last year compared to 2012.

“We’re a long way from being back to where we need to be but we’re heading in the right direction,” he said.

HBAR’s study also found that the number of building permits issued for single-family home construction was up 29 percent in 2013 over the previous year. That’s thanks to 3,274 new residential permits issued during the year, a jump from 2,543 in 2012.

The HBAR data was gathered by research firm Integra Realty Resources-Richmond. For the purposes of the study, the localities measured included Chesterfield, Henrico, Hanover, Goochland, New Kent, Powhatan, and Caroline counties and the City of Richmond.

A few other statistics from the HBAR study:

• About 27 percent of all new homes sold in 2013 were condos or townhouses.