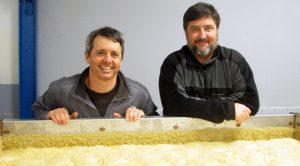 Beer isn’t the only booze flowing out of Scott’s Addition.

Summit Avenue-based Reservoir Distillery is ramping up production in its 5-year-old space to increase its total whiskey production between five- and eightfold. It’s filling its warehouse with steel fermenters and mash tanks, a new copper still and hundreds more barrels.

“Originally this was all part of a ‘proof of concept’ thing,” co-founder Dave Cuttino said of the distillery’s first few years in business. “Our stuff just kind of struck a nerve with the market and we haven’t been able to keep up with demand.” (In Virginia, Reservoir’s bourbon sells for $41.95 per 375-milliliter bottle.)

Cuttino and co-founder Jay Carpenter, 1990 Collegiate graduates, came up with the idea for Reservoir while drinking high-end whiskey. They thought they could make a better product than the one they were consuming, and put their first bottles of Reservoir on ABC store shelves in 2011.

From its start, Reservoir has made its whiskeys out of a 5,000-square-foot space marked only by a small Summit Avenue-facing sign. Cuttino said even that would come down if federal law didn’t require Reservoir to mark its distillery.

In half a decade they haven’t done any marketing aside from sporadic appearances at one-off events because Cuttino and Carpenter are afraid they won’t be able to make enough whiskey to fill the demand they could create.

“Every time we do the whiskey fairs and such, we’re worried that we’ve told too many people,” Carpenter said. 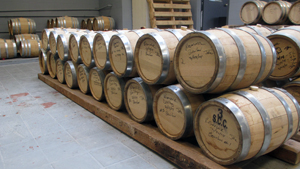 Controlled growth has been a key for the distillers, who are limited to making less than 5,000 gallons of liquor per year by terms of their ABC license. Reservoir is in 60 ABC stores statewide and eight other states, and maintaining inventory can be a concern. Cuttino said liquor stores won’t hold retail space for brands that can’t keep the shelves consistently stocked.

“If you rise too quickly and don’t have enough, you can flame out,” he said.

Even now, Cuttino said, he doesn’t have quite as much product on reserve and ready to go out to ABC stores as he would like.

To complicate matters, Reservoir’s whiskey must age in three-gallon oak barrels for about six months to absorb its flavors before they can take it to market. And there’s no set recipe for exactly how long Reservoir ages its whiskey. When they think a batch is close, Cuttino and Carpenter take a sip out of a barrel.

If it tastes right, it goes to market. If not, it stays in the barrel a little longer.

That’s why Reservoir is building its whiskey war chest now before beginning to ramp up marketing efforts and look for new markets in the next year or two. Cuttino and Carpenter declined to say how much they were spending on the upgrades, but said they have been funded with cash flow from the business.

On Tuesday, Cuttino estimated that Reservoir had 1,000 gallons of whiskey aging on the distillery floor. The floor will get a lot more cluttered as Reservoir starts pumping more whiskey out of its still. The first move is upward, Cuttino said, and Reservoir will stack barrels on top of barrels until they run out of space, but eventually they’ll need a new place to store their stock. Cuttino estimated they could need anywhere from 30,000 to 50,000 square feet.

They’re also experimenting with new recipes by blending their three staple mashes into hybrid rye, wheat and corn whiskeys, and have considered making a lower-end whiskey that bartenders will be more willing to mix into less expensive cocktails.

To make the lower-end batches, Reservoir bought its first full-sized 53-gallon whiskey barrels, 17 times the size of its usual barrels. Wood-to-whiskey ratio is the key to aging the liquor, and Carpenter guessed it might take eight years to get the same top-end Reservoir flavor from a 53-gallon barrel.

If Cuttino and Carpenter like the big barrel whiskey after a couple years of aging, Reservoir will have a new, lower-priced product.

A friend shared a glass and I found the taste to be phenomenal. It’s exciting to have this as a Richmond product. Will be gifting some as well.