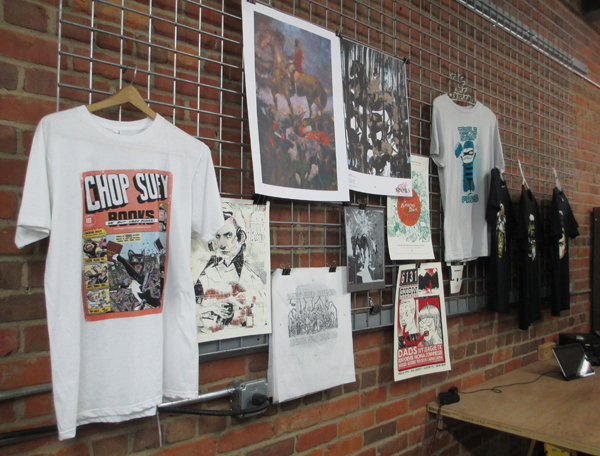 Some of the products Triple Stamp made for Chop Suey Books. (photos by Michael Thompson)

It was 2010 when Richmonders Jonathan Vassar and Wil Loyal, two amateur screen printers and fellow local musicians, decided they needed a slight change of tune.

“We were pushing 30 and were kind of starting to think about what the rest of our lives are going to look like,” said Loyal.

“[Vassar] had a bunch of ideas that he was kicking around and I was like ‘if you’re serious about starting something, I’ve been kicking around the idea of a screen-printing business.’”

They went to work in Loyal’s basement, though a business mentor of theirs wasn’t so sure about the plan. 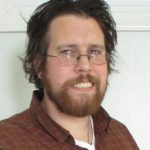 “ ’No one screen prints anymore. Maybe you’ll make enough to eat,’ ” Vassar, now 34, recalled the mentor warning. “Everything at that time was colored by the recession.”

But four years later, their screen-printing startup, Triple Stamp Press, is in growth mode and carving out a niche in the industry from its facility at 200 Everett St. in Manchester.

Since late last year, Triple Stamp Press has spent about $100,000 of its own money upgrading the equipment at its 2,000-square-foot production facility. Improvements have included installing an automatic press – in place of a more cumbersome manual one – and a propane dryer to cure and dry shirts faster.

The upgrades nearly triple the company’s output and on any given day Triple Stamp can churn out about 2,000 freshly printed shirts. They’ve printed everything from event posters for Red Bull and business cards for the Martin Agency to apparel for Chop Suey Books in Carytown.

It’s also continuing to corner its own piece of the competitive screen-printing industry as an exclusively water-based ink shop.

The screen-printing industry standard is to use plastisol-based ink, which is made of the same chemicals used to make PVC piping. Less harmful to the environment, water-based inks get down in the fabric of the shirt, unlike plastisol which stays hardened on the surface and can crack and peel. The inks used for each of job are custom made by Triple Stamp.

“In a standard shop, a water-based job is a specialty job – there’s a markup,” Vassar said. 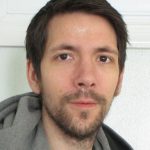 Most of Triple Stamp’s revenue comes from apparel and about 40 percent comes from paper products. An order of 24 basic T-shirts printed with two colors costs about $190 at Triple Stamp. That’s neither the most expensive nor cheapest available in Richmond.

The screen-printing industry spans small operators working from home to massive companies that print on everything from golf balls to coffee mugs. Bigger companies tend to emphasize affordability and speed, Loyal said. A mid-sized press like Triple Stamp has one automatic press; a bigger company might have four.

“We don’t even attempt to compete in that market,” said Loyal, 33. “It’s difficult when you’re selling a product that requires consumer education.”

One of the upsides of the screen printing game is that advertising is built into each product.

“We printed some shirts early on with our business for a band in Lynchburg. That band played a pizza shop in Lynchburg. The people (working) at the pizza shop saw the shirts and ordered shirts from us,” Loyal said “You do good work and you essentially have people walking around showing your work everywhere.” 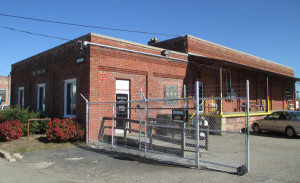 The pair first met in 2002 when they crossed paths in Richmond’s music scene. Over the years, Loyal has been a vocalist for various bands and started Triple Stamp Records in 2004 with a couple of friends. He honed his screen-printing skills, making flyers and apparel for the bands he signed.

In 2007, Loyal reached out to Vassar, a singer-songwriter, and eventually signed him onto Triple Stamp Records. He has a new record coming out this summer.

As the print shop grows, Loyal and Vassar are finding that their work is changing. In 2012, Spencer Hansen and Matt Deans took on small ownership roles. Having trained two full-time employees to be able to handle production, Vassar and Loyal are focusing more and more on the kind of networking and outreach that leads to new business.

It’s new territory for them.

“I don’t want to be a salesman. I want to be a printer,” Loyal said. “I feel conflicted sometimes, but it’s a necessity.” 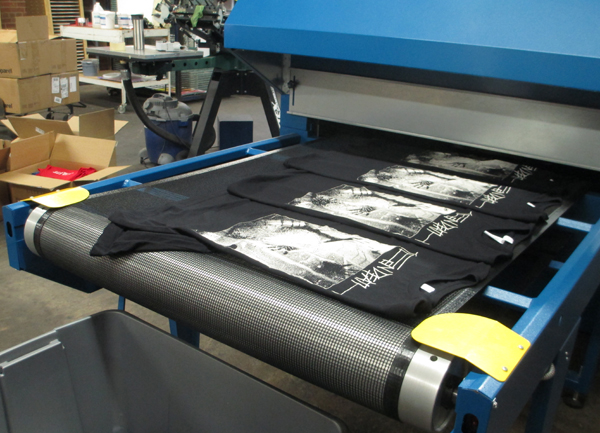 The conveyor belt dryer that cures the ink into shirts.